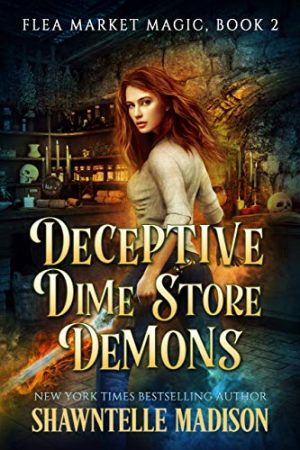 Opening shortly after the conclusion of Thrift Store Trolls, we discover that Aggie is moving into her own apartment and find Nat preparing to work the night shift at a new-to-town demon-run store (as a payment of debt from her actions in the previous book). The mysterious store transforms at sunset/sunrise, with Nat working for the Midnight Madame on the Midnight Barge, and during the daytime, the store is run by the Daylight Dame. Adding to the stress in Nat’s life, Thorn’s brother and dad move into her home after a fire destroys their cabin.

When a dangerous relic is stolen from the Midnight Barge, the Midnight Madame gives Nat two weeks to solve the crime and return the stolen Cerberus’s Dog Whistle, “or else…” Knowing they are in danger from a vicious new predator, Nat and Thorn rally the pack.

Deceptive Dime Store Demons is an exciting adventure from beginning to end. The expanding mythology is unique and interesting. I enjoyed following the clues with Nat and watching her put it all together. She’s developed her sleuthing skills, and it’s exciting to witness her take on her alpha female role. The book is a wonderful mix of urban fantasy action, mystery solving, and character growth and development.

One of the best things is how Thorn and Nat’s relationship has matured. This can only happen because Nat continues to grow as an individual. She’s learning to face her issues and take on more and more. She’ll always have mental heath issues, but she’s coping and learning to lean on those around her. She’s working on herself by dealing with the toxic relationships in her past and present (Erica and Farley). I love that Thorn stands up for Nat, and she feels worthy of his love and respect. And I love the tender moments between Nat and Thorn. Their rock-solid love allows Nat to push herself outside her comfort zone, and it’s made the series and stories better.

Deceptive Dime Store Demons brings readers a great blend of action, paranormal shenanigans, and character growth. I look forward to finding out what trouble finds its way to Nat in future books.

My Rating:  A- Enjoyed it a lot

Conniving creatures and their exorbitant prices are coming out of the wood work in South Toms River, New Jersey.

Werewolf Natalya Stravinsky has stepped up to the plate as alpha female of the South Toms River Pack and defended her loved ones. While She Who Always Walks the Path is still a looming threat, another problem arises. Nat must fulfill her debt to some shifty demons who own a ceramics mart in town. A mysterious thief has appeared, stealing powerful weapons. Now, Nat must discover the culprit before the demons unleash their fury on the pack.

Will Nat be able to uncover the thief and restore balance, or will the delicate facade keeping the human world from the supernatural one come crumbling down?