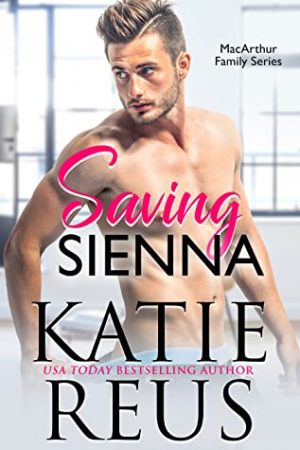 Saving Sienna is the last novella in the MacArthur Family series by Katie Reus and it focuses on the sister Sienna, and Carson, who is the brother to her new sister-in-law from the first novella, Falling for Irish.

Sienna is a PI and is currently working on a case where a married couple is going through a divorce, and the husband is trying to hide assets, like a yacht. Sienna is aboard the yacht taking pictures for her case when she hears voices and jumps ship (literally) in order to not get caught but before she does she gets a photo of the hubby and two other men.

Carson sees Sienna jump off the yacht and tells her to come to his place to change into dry clothes. Carson being a detective asks questions about her case. After some sexual tension, Sienna leaves Carson’s place to continue about her day and he, his. But they aren’t done with each other just yet, there’s a murder and someone breaks into Sienna’s house. Thinking the two events are connected, Carson gets Sienna to stay with him for safety.

Carson hasn’t gotten over Sienna and wants more than that casual hook up they had a few months ago. Sienna has been burned before and once Carson tried to move them to the next level she was out.

Saving Sienna is fast paced, action filled, sexy second chance romance. I look forward to more stories from Katie Reus. I’ve enjoyed this suspenseful contemporary romance series some so of her other series in the past. If you’re looking for great characters and sexy romances you should pick up one of her titles today.

He likes law and order…

Detective Carson Irish follows the rules. But somehow he’s fallen for a sexy PI who likes to break all of them. When she gets in over her head, he’ll do anything and everything to keep her safe. But she refuses to stay on the sidelines, safe and protected. And when her life is threatened, he won’t hesitate to stand between her and the man who wants her dead.

Private Investigator Sienna MacArthur may have questionable methods in her work, but she gets the job done. While working a case, she unwittingly finds herself the target of an unknown threat. So she reaches out to the sexy man she’s been keeping her distance from—Carson Irish. They might be polar opposites, but she trusts him to keep her safe, and when people around her start dying, she has no choice but to put her life in his hands.