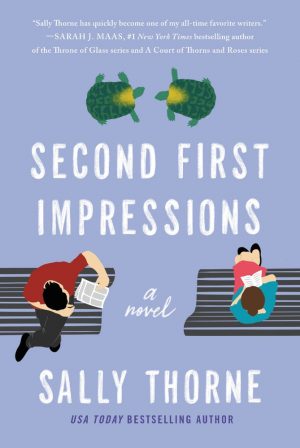 Second First Impressions is a sweet romance between two opposites who attract. Teddy is the tall, dark, handsome and tattooed guy with a bike. Ruth is dresses and acts twice her age. They met by chance and a friendship with sexual tension builds between them.

Ruth has lived and worked at a retirement village, taking care of the residents and a group of endangered tortoises that live there. She feels safe at Providence but being there for the last six years has turned her from a twenty-five year old to a ninety-year old. She has no friends her own age or a boyfriend. Her only romantic relationship was in high school where she lost her virginity to her one and only boyfriend. Her dad is a reverend and once the prom night was over her boyfriend went running to her dad to confess his sin.

Teddy appears to be a bad boy with his long hair, tattoos and motorcycle. After learning he is the son of the new owner of Providence, you could add into the assumption he’s a rich spoiled bad boy. He’s two years older than Ruth, twenty-seven. He has had a different life than Ruth but not as she first thought. Teddy is deeper than even he wants to believe. He’s a good guy underneath it all and Ruth helps him realize it, like he helps her come to terms with her being more than just an administrator of a retirement village.

Second First Impression is a sweet, touching, slow burn romance about two twenty-somethings finally learning what it means to be an adult and what their lives could look like if they just believed in themselves more.

Ruthie Midona has worked the front desk at the Providence Luxury Retirement Villa for six years, dedicating her entire adult life to caring for the Villa’s residents, maintaining the property (with an assist from DIY YouTube tutorials), and guarding the endangered tortoises that live in the Villa’s gardens. Somewhere along the way, she’s forgotten that she’s young and beautiful and that there’s a world outside of work—until she meets the son of the property developer who just acquired the retirement center.

Teddy Prescott has spent the last few years partying, sleeping in late, tattooing himself when bored, and generally not taking life too seriously—something his father, who dreams of grooming Teddy into his successor, can’t understand. When Teddy needs a place to crash, his father seizes the chance to get him to grow up. He’ll let Teddy stay in one of the on-site cottages at the retirement home, but only if he works to earn his keep. Teddy agrees—he can change a few lightbulbs and clip some hedges, no sweat. But Ruthie has plans for Teddy too.

Her two wealthiest and most eccentric residents have just placed an ad (yet another!) seeking a new personal assistant to torment. The women are ninety-year-old, four-foot-tall menaces, and not one of their assistants has lasted a full week. Offering up Teddy seems like a surefire way to get rid of the tall, handsome, unnerving man who won’t stop getting under her skin.

Ruthie doesn’t count on the fact that in Teddy Prescott, the Biddies may have finally met their match. He’ll pick up Chanel gowns from the dry cleaner and cut Big Macs into bite-sized bits. He’ll do repairs around the property, make the residents laugh, and charm the entire villa. He might even remind Ruthie what it’s like to be young and fun again. But when she finds out Teddy’s father’s only fixing up the retirement home to sell it, putting everything she cares about in jeopardy, she’s left wondering if Teddy’s magic was all just a façade.