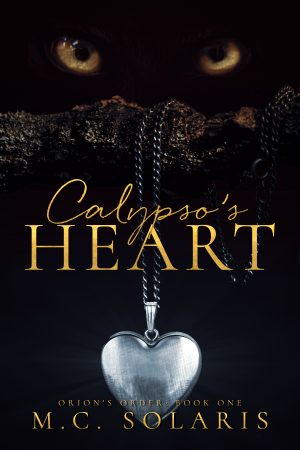 With her hand hovering over the door handle, her mind was flooded with thoughts of how she hadn’t really thought this through. She jumped ten feet up in the air when the door suddenly swung wide open.

Blake. Blake was standing there… in nothing but red boxer briefs. She swallowed at the unexpected male underwear model scene. Meanwhile, she was only adding to the scene by standing there in nothing but his white T-shirt which barely covered her butt. Nope. Not awkward at all.

“I… I had a nightmare,” she admitted on a shy whisper.

Both Blake and his wolf liked that she ran to him when she was scared. He would protect her from anything and anyone. But he didn’t like that she was scared to begin with.

Still half asleep and on autopilot, he picked her up and held her close to his chest.

“You’re safe, Caly,” he reassured her and felt her body relax as she curled in closer. It wasn’t until he was a few steps into his current mission that it hit him. Walking Caly to his room in nothing but his boxers while all she wore was his T-shirt, which he most definitely approved of, was so not a part of the gentlemale plan. F**k it. She needed him. Quietly shutting the door behind him, he made his way to his bed and gently laid her down.

Now what, genius? he thought, as his sleepy state faded away a bit more. He was just standing over her in nothing but his boxer briefs. Yeah, real gentlemale of you.

Christ. He wanted to punch himself. Maybe that would knock some sense into him instead of standing there basically naked.

“Will you… Will you stay? Please?”

Okay… So, he wasn’t expecting that. But then again, she did come to him for comfort. He wanted to say, Caly, I will never leave you. But that probably wasn’t the brightest idea at the moment, considering the boxer brief situation.

“Of course,” he said as his eyes automatically flicked toward the couch. Before he could command his feet to move, she peeled back the covers next to her and looked at him in question.

Gentlemale. Remember your gentlemale plan, he thought, sliding into the bed next to her and keeping a respectable distance.

That was when he noticed the light coming from the bathroom. Remembering what Caly said about it being complete darkness where she was held, he wanted to go round two with the punches. He was so used to being able to see in the dark that it didn’t register how dark his room was at night. He inwardly cursed. He should’ve thought of that. He decided he was going to rectify the situation and get her a night light. Actually, make that plural: night lights. Yeah, he was going to light up his room like it was a Christmas tree.

What are you doing? Caly thought. You’re now in bed next to him practically naked. Again, notice how he is keeping his distance? Congratulations. You’ve just breached the clinger scale and are now off the charts.

Laying on their backs, with eyes glued to the ceiling, they both stayed silent for several minutes.

“I’m sorry. I don’t mean to make you uncomfortable. I…”

Just come out and say it, McClinger Queen.

“I just feel safe with you.” She paused. “I had a nightmare about…” Suddenly, she had a lump in her throat. She swallowed.

If you enjoy Psy-Changeling and Black Dagger Brotherhood, this new series is right up your alley!

Do you dream of ridiculously hot men? Okay, maybe you do. (And yes, I’m well aware I should lay off the romance books before bed.) But do you actually ever meet those men you dream about in real life? I didn’t think so. That’s probably a good thing though because I have… And these men from my dreams have done nothing but pull the rug of reality out from under me… which was how I fell and ended up in a world that I thought only existed in romance books.

My name is Caly (AKA Callie) and I’m just an ordinary single woman living the LA dream… paycheck to paycheck. Except whose dream is it? I’m not really sure… but it’s not my dream. Especially because I have really weird dreams… like really weird. Then again, everyone has weird dreams, right?

I am an alpha wolf shifter and leader of Orion’s Order, a pack of… well, not wolves. We’re an unconventional pack of highly skilled specian hunters that do one thing: hunt the evil in our world. And we were hired by SILE (Species Intelligence Law Enforcement) to hunt a bloodthirsty criminal who is infamously untraceable. That was until an irresistible female brought an unexpected twist to our hunt and set things in motion… a motion that has left my pack and our world forever changed.

Welcome to The Order and a secret world of magic and mystery, where a pack of unlikely friends find love and fight against an ancient evil force.

Devour this addictive series at your own risk…

M.C. Solaris’s life took an unexpected turn during the super blood moon eclipse on January 20, 2019. She woke up and began writing bios for her imaginary friends that she met that day. As soon as the pen hit the paper (or fingertips to the iPhone), she couldn’t stop. It was kind of like one of those fire hydrants, spewing copious amounts of water all over the place. The characters and their stories just flowed out of her. She is honored to be the scribe, getting to share her friends’ stories. You can read all about her gifted friends in the Orion’s Order series (Book 1 is Calypso’s Heart).

On a personal note, M.C. Solaris is actually the pseudonym of Marina Schroeder, women’s health enthusiast and lover of all things paranormal romance (PNR) and happily ever after (HEA). When she is not curled up on the sofa with her partner’s oversized hoodie, a PNR novel, peppermint tea, and one of her three cats, you will find her either at the ocean with her toes in the sand or in a forest hugging a tree. Well truthfully? There is one more place you might find her: trolling the aisles of Whole Foods for a satisfying combination of salty and sweet while hiding in her partner’s hoodie… like any proper PNR-writing introvert.

Want to get the latest scoop, sneak peeks, and short shares all about her imaginary friends? Go to www.mcsolaris.com  and sign up for the newsletter.

Welcome to The Order!