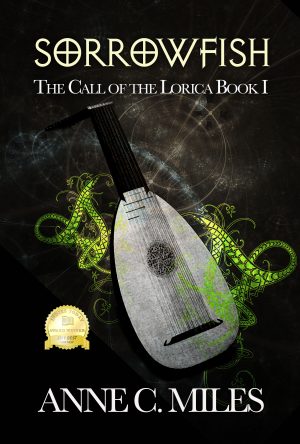 Dane woke, surprised his head wasn’t pounding from all the ale he had consumed. It was dawn. He hadn’t really slept, but he was alert. He dressed quickly, emptied most of his purse and hid the contents under his thick feather mattress. He needed a new pair of boots, quickly. For that matter, he really needed to change his entire appearance. He had pondered the problem the night before, brooding.

He ducked out of his room and down the stairs.

Dane’s description could have been passed throughout all Conclave chapters by now. At the larger Chapters, there would be questioners, skilled at detecting Dissonance. Lies could be almost scented by a questioner. And if there were no questioners? This was Ciclaehne. Each active Speaker had the talent.

Dane had to come up with a method to hide his identity from the Conclave, while not rousing suspicion from the Northmen or the dwarf. He must manage to deceive questioners, all without overtly speaking a lie. Thorny.

He shouldn’t go. This was madness. He was just guessing what the fae meant with her babbled phrases. The game is not a game. It could mean anything. But he had already committed. If he didn’t show up, the dwarf would look for him.

It was early, yet the streets bustled with activity. Dane traced his way back to the shanties below the outer wall. Beyond the gate, rows of pavilions, shacks, and other makeshift shelters crouched, haphazard. Like drunken sailors, they lurched and leaned into each other, leaving no space between them. Where space did open, shadows pooled. Dane surveyed the scene, impassive, before heading into their midst.

Dane was relieved to find a likely tinker after only a short walk. He lounged on a low stool in the shadows of a makeshift storefront.

“That’ll be a one and a ha’penny, young sir,” the tinker said to Dane, handing him nondescript pewter buckles. Dane paid the man, pocketing the buckles with a murmured thanks and continued down the tented path on the lookout for a barber. Children played in the distance, chanting an old rhyme.

Dane stopped, listening. He felt a pang of homesickness and shook his head to clear it. No time to wallow today. His eyes fell on a painted white pole wrapped with bloody linens, two shacks down. Perfect. The mottled bell on the door jingled as he entered.

“Good morning, young sir.” The barber smiled from behind a large wooden chair. “How might I be of service? Do you need a shave? A tooth pulled? An illness cured?” He motioned to the array of instruments behind him, some rather fearsome. Pincers, claws, knives, scissors, and razors all neatly shone on trays.

The barber beamed. “The fashion of acolytes! Are you bound to the Chapterhouse then?”

“Well, say no more, I shall make you suitable in two shakes of a lamb’s tail.”

“Also, I do not wish to have my tooth pulled, but believe a packing of garlic and fabric would help one in the back. ’Tis bothersome. My mum taught me the trick,” Dane said. “Might I get a bit of clean packing?”

“Certainly, young fellow, and the garlic as well. ’Tis a remedy I myself employ to save a tooth. Your mother is a wise woman.”

When Dane emerged from the barber’s shack, his boot buckles had been replaced. His thick shock of black hair was completely gone, and the right side of his face was packed with garlic and linen. The pungent odor made his eyes water, but the smell would deter the curious. He’d venture even Pezzik would not know him on sight.

He purchased gently worn garb, a linen tunic, a cloak, and a leather jerkin. Almost ready. He returned to his room and quickly donned his new clothing. He belted the tunic, covering all with the hooded traveling cloak, and then headed back downstairs, preparing to explain his transformation. This was the thorny bit.

Dane was directed to the stables behind the inn, where he found Bellin, Harald, and Birgir saddling their mounts, preparing for the day’s journey.

“Can I help you, sir?” asked Bellin, as Dane approached.

“Aye,” said Dane in a passable rendition of the dwarf’s thick Northern brogue. “I need to know if you’ve seen a thieving scamp of a weevil by the name of Danethor. Lad has made off, breaking a promise to a fine young lass. I mean to uphold her honor and bring him home.”

Birgir stopped, glaring at Dane and back again to Harald in confusion. He peered more closely. “By Lalo’s right tit, you’re a proper knave!”

He walked up to Dane and squarely punched him on the nose. Dane reeled, taking a step back and did the only sensible thing. He crumpled to the ground, unconscious.

Sara Moore is having crazy dreams. The scary part? Waking up, with scratches and splinters. Is she losing it because of stress? Is she sleepwalking? Or is she going to another world in her dreams? No. Couldn’t be.That’s insane. Her twin sister, Marilla, is in a coma. One more unfinished sculpture will fully tank her grades. Goodbye bachelor’s degree, hello failure. Her mother will never let her live it down.

It’s enough to make anyone sleepwalk.

Choosing to defy the Conclave, Trystan, a bard from Pelegor, risks capture and mind control to find a magical lute through a shadow network. Dane, a wizard-luthier, meets a sinister stranger and barely escapes with his life. Together, guided by a fae only known as Sara, they will end an ancient curse and create a magical bond…or die trying.

Anne C. Miles, an award-winning author, was born in Chicago Heights, Illinois in 1971. She successfully avoided writing fiction for years by blogging and extensive journaling. However, one day, she logged into a writing site and scribbled. She kept going, and now cannot stop. Her book, Sorrowfish, was named Best Fantasy of 2019 by Indies Today.

Anne was confirmed in the Anglican Church (ACNA, High Anglican) in 2016. She takes communion once a week. When Anne isn’t working or writing, she plays violin badly and spoils her grandchildren.

She is hard at work on the next book of her series, The Call of the Lorica.