The Elementalist: Journey to Zlorta 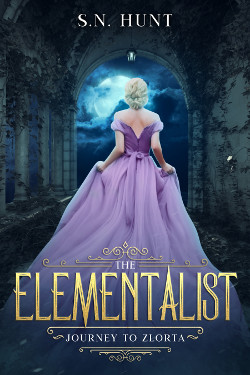 I should run! Just take off into these woods.  But where to?  Back to Jason’s body on her kitchen floor.  They would probably blame her for his death.

She saw that Micheal was watching her.  She squared her shoulders and laid her hand against the saddle.  As soon as he turned his back, she took off running.  She made it to the trees before he caught her.

Damn, the big bastard was fast!

He threw her up over his shoulder. She landed on her stomach with a groan. The force of it knocking the air from her lungs.

“We can do this two ways. You walk on your own through the gate. Or I tie you to Lucifer’s saddle. Your choice, princess.”

She cried out and started beating her hands against his back.  He sighed and slapped her bottom hard.  She instantly stopped and thought about her options.

He smacked the back of her thighs and said, “One….. Two…”

She felt the sting of his swats and held back tears. She had never been spanked or slapped in her life. It hurt.

“If I set you down, no running. You run again and I will tie you to that saddle. Then I will make you regret running. Those two swats will be minor in comparison.”

She swallowed hard and shook her head yes.  He shrugged and bounced her on his shoulder.

“Words, princess. Use your words.”

He set her down and placed her hand on the saddle. She struggled to keep back her tears. She felt like a disobedient child that had been caught in the act.

When nightmares become real, not everything is as it seems.

Sarah is exhausted as nightmares haunt her nights.  What will happen when her nightmares become reality?

An evil vampire is intent on having her for himself.  Only Micheal can protect her.  Together they journey through the Veil.  Each step brings her closer to him, igniting a passion and desire she has never felt before. But her nightmares haven’t stopped.  Can she protect Micheal and prevent his death?  Or will the vampire destroy all she loves and make her his own?

If you love fantasy, romance, and adventure you will adore The Elementalist. Dive headlong into this new paranormal fantasy adventure romance about vampires, magic, mythical creatures and a woman finding love in the arms of the man sworn to protect her.

S.N. Hunt loves to read and write all about fantasy and romance. She wrote her first story when she was in her twenties. Then her computer crashed. At the time she took it as a sign and quit writing. Now fifteen years later, the story wouldn’t leave her alone. Thus her first self published book The Elementalist: Journey to Zlorta was born. When she is not writing or reading, she is spending time with her hubby and furbabies. She enjoys camping in the summertime and fishing til the sun goes down. She loves cooking, baking, and of course eating. Family is very important to her and she thanks God everyday for the support they have given her.