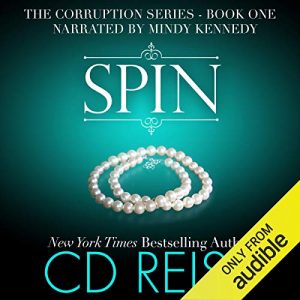 Theresa Drazen and Antonio Spinelli story starts in Spin and continues through Ruin and Rule making up the Corruption series by C.D. Reiss.

Theresa is the youngest girl in the Drazen family, and Antonio moved to LA from Italy to avenge his sister. While he didn’t plan to stay in LA and become apart of the mob like his father back home, ten years later he finds himself in the life and pretty high up the chain of command.

Theresa is fresh off a break up with her fiancée. He is the local DEA, and he’s running for mayor but he couldn’t kept it in his pants so they broke off their engagement. Theresa doesn’t think she can trust another man until she meets Antonio and for some reason (even she can’t figure out) she trusts him from the start.

Antonio and Theresa’s romance runs hot and cold, for about 5 minutes until he talks dirty to her and she can’t resist him. Sex, they have a lot of it. Mostly hot and sexy but at times I wanted more development in their relationship with their pants on. Luckily there’s some danger and tension to help add to the their story.

I really enjoyed listening to Spin and Ruin but I almost didn’t make it through all of Rule. Why? Well I’ll try to let you know without spoiling you. The way Ruin ended it, Theresa and Antonio’s HEA would’ve been satisfying enough. But a plot twist (I might say unnecessary twist) happens and their story drags on for another 8 hrs and 18 mins.

Spin is narrated solo by Mindy Kennedy. She does a great job with Theresa’s voice and Antonio. Ruin and Rule Kennedy is joined by Brian Pallino as he narrates Antonio’s POV. I understand the addition of Pallino because of the changing POVs but I would have been happy to listen to Kennedy do all of the novels. I actually liked her voice for Antonio more than Pallino’s. He’s voice for the other male characters were great but for me, he voiced Antonio a little over the top.

Theresa Drazen can have plenty of guys, but the one she can’t keep away from…. the one she’s just about addicted to, is more than forbidden. With felony-black eyes and a mouth built for lies, loving him is one step away from illegal.
But her body keeps overriding her brain. Maybe it’s time to stop playing by the rules.
——-
Antonio is obsessed. Theresa’s the last woman he should touch. She’s going to get him killed. She’s dangerous. Poison. The wrong woman.
Except… she’s perfect.