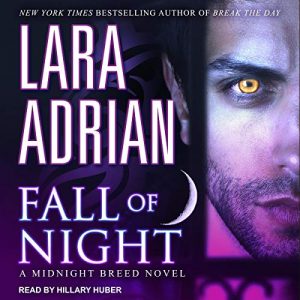 Phaedra, an Atlantean, is plagued by a reoccurring dream where she is lost in a dead forest wasteland. However, this most recent time is different, she meets a Breed and witnesses an explosion. Micah, son of original Order member Tegan, is in Kazakhstan when he is severely injured and his team is killed by an explosion. Tegan recovers Micah and brings him to the Order’s Rome headquarters. When Micah wakes to see the mysterious Atlantean whom he encountered in the Deadlands, he doesn’t trust her and vows to avenge the death of his team mates.

Filled with tough alpha males and strong independent women, Fall of Night follows the mold of the Midnight Breed series titles. Micah and Phaedra have a rough start when she cannot explain how she is in the Deadlands when his team is attacked, and suggests they are soulmates based on an ancient Atlantean myth of dream walking. I enjoy their back and forth banter as they come to terms with their apparent destiny. There are a few twists along the way that add to the story, separating it from all of the other books.

Overall, the story is fine, but the author continues to use the same plot patterns and character attributes in every book. Micah pushes Phaedra away, believing himself not good enough, broken, incapable of anything good. It’s repetitive in both this book and the entire series, and this plot device has become boring to me. For once I’d love a warrior to embrace help from a formidable female rather than push her away to protect her.

Narration: The story is shared in shifting third-person POVs, primarily between Micah and Phaedra. Ms. Huber uses a narrator voice that is very matter-of-fact and straightforward for all POVs. The neutral narrator comes off a bit robotic at times in contrast with the dialogue, which is emotion-filled. Every character has a nearly unique voice, usually distinguishable from the others. She adjusts her voice for gender and supplies a variety of fabulous accents.

In the end, Fall of Night is an exciting, action-packed tale that pits the Order against their biggest enemy. There is a pretty big twist near the end that gives promise for a future installment. The romance between Micah and Phaedra is sexy, albeit quick; however, I feel that the characters continue to fall into the same patterns with each story, making it repetitive.

My Ratings
Story: C+
Narration: B

Breed warrior Micah is one of the Order’s best, his reputation for cold justice and lethal skill rivaled only by that of his formidable father, Tegan. So, when a mission Micah’s leading in an off-limits area called the Deadlands goes terribly wrong, leaving him the sole survivor of an apparent Atlantean attack, he won’t rest until he has answers…and vengeance for his fallen team.

Phaedra thought it was only a dream, a hideous nightmare. Yet somehow, she had been transported from her life in Rome to a stretch of barren forest when it suddenly lit up with unearthly fire, obliterating everything in its path—including the fiercely handsome Breed warrior she’d encountered in the dream. Or so she believed, until their paths cross again and Phaedra finds herself, and her Atlantean people, at the center of Micah’s wrath.

With tensions between the Breed and the Atlanteans already edging toward war, and another powerful nemesis growing bolder by the day, uncovering the stunning truth about what happened in the Deadlands will force Micah and Phaedra to work together in an alliance forged by fate and an undeniable desire neither of them can resist.