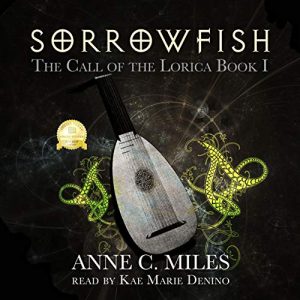 Sara Moore is a college student in Kentucky, struggling to finish her senior project and graduate after an accident put her twin in a coma. At night, she dreams of a far-off land with quaint humans and fairytale gnomes. Sara doesn’t understand that her dreams are real, and on Canard she’s considered a fabled Fae.

Dane Whitley is a cabinet maker who holds a dangerous secret: he is Dewin and uses the Song to create magical lutes. Trystan is a bard-in-training who is seeking one of the extraordinary lutes. And both are hiding their secrets from the powerful religious Conclave.

Spanning two worlds and several characters, Sorrowfish by Anne C. Miles is an ambitious, good vs. evil fantasy. The tale alternates between the point-of-views of several characters, with Sara and Dane being the primary storytellers and several other characters adding voice and knowledge to enhance the plot. There is a steep learning curve as Ms. Miles tosses readers right into the thick of her world and the ongoing plot. (She’s developed a website with the primary characters, locations, and concepts, which enhances the experience: https://www.annecmiles.com/sorrowfish/)

The overall concept of the story is a classic good vs. evil retelling. On Canard, music is magic and life. There is THE SONG which has been corrupted and sews dissidence into the world. The powerful ruling Conclave is founded in religion and provides order for the world. But there is another version of the facts that is spread by a secret group called the Spinners. They tell how the Conclave is corrupt and twisting the Song into dissidence. Sorrowfish marks the beginning of what could be a turn in events and the start of a new world order.

The path of Sara and Dane is filled with bends and twists. Each must find their own truths in order to move forward. Sorrowfish is long and winding, but filled with rich detail and an interesting mythology. There is a varied and expansive cast of characters that help shape the storyline. My favorites include the gnome protectors Pezzik and Jax, Sara’s best friend Peter, and the Chymaera who are shapeshifting beings that create stone figures that are semi-autonomous helpers of the Conclave.

Narration: Sorrowfish is shared via the third person POVs of multiple characters. The narrator uses the same neutral voice for all POVs. It is a bit rough around the edges, but it’s easy to follow when the POV changes. The narrator does an excellent job altering the dialogue keeping each character unique whether old, young, man, or woman. She adds accents to distinguish various locales and adjusts her tone to match various creatures’ temperaments. Her overall voice is youthful and fitting for the main characters of Sara and Dane. She infuses the dialogue with the appropriate emotions.

In the end, I really enjoyed this epic fantasy. It was long and winding, filled with familiar and unique. Ms. Miles has created an interesting world, and Sorrowfish is just the first chapter in a much larger tale. I look forward to finding out what comes next for Sara and Dane.

My Ratings
Story: A-/B+
Narration: A-

A bard. A wizard…and a college student from Kentucky.

Sara is having crazy dreams. Gryphon and dragon crazy. The scary part is waking up, safe in her apartment, with scratches and splinters. Is she losing it because of stress? One more unfinished sculpture will fully tank her grades. Goodbye bachelor’s degree, hello failure. Her twin sister is in a coma. And on top of everything else, her best friend Peter wants a date.

It’s enough to make anyone sleepwalk.

Choosing to defy the Conclave, Bard-in-training Trystan risks capture and mind control to find a magical lute through a shadow network. Luthier-wizard Dane meets a sinister stranger and barely escapes with his life. Together, they must end an ancient curse, guided by a fae they only know as Sara.