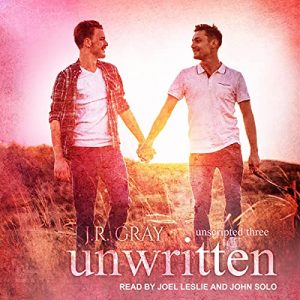 I began my familiarity with the Unscripted series with Unwritten as a standalone ebook last year, so getting back around to it as an audiobook was an odd, but gratifying experience. Once the audiobooks were released, I was fortunate enough to start from the beginning with Unscripted and Rewritten (Unscripted #1 and #2, respectively), finally re-arriving at Unwritten with a more well-rounded perspective. It ended up being a really fun way to get to know all the characters as they fought for the love they’d found with one another.

Tobias West has been in show business since the age of fifteen, and ten years later, he’s one of the most sought-after action heroes around. Too bad he’s an extrovert without a social life, counts his body guard and his dog as his only real friends, and somehow remains a reluctant virgin, even though he broke Grindr for an entire weekend when his profile turned out to be legit. Mel Finch thinks he’s seen everything in his ample time working with celebrities, but realizes just how wrong he is when he meets the gorgeous, charming star of the new movie he’s directing—who’s not only off limits because of contractual obligations, but is also twenty years younger. Talk about “forbidden fruit.”

While Unwritten still holds up as a standalone, I liked it even more after getting to know the characters in the previous stories. Mel is present throughout the series as Quell’s best friend and the guiding force/devil’s advocate that brings Hale and Quell together, so I couldn’t help but be pleased to see him tortured right back as he falls for Tobias. Juggling romance and professionalism wasn’t anything he planned on having to deal with, and it was interesting to have his POV here. Tobias made an appearance or two in the second novel as Hale’s onscreen love interest/nemesis, and reprising the dynamic when the man he loves is directing the more explicit interactions actually led to some of the most compelling moments.

Once again, the narration is shared between the equally talented John Solo and Joel Leslie, both of whom I’ve had the pleasure of listening to for quite a few titles apiece now. I will say that, having gotten used to hearing them as Quellcrist King and Hale Evans for two novels did confuse my ears on occasion initially, but the qualities that separate them from Mel and Tobias shone through pretty well for the most part. Both performances were welcome additions to my earlier imaginings for these characters, and I was able to enjoy the story as a whole thanks to those efforts.

Experiencing Unwritten again was a good way to finish the Unscripted series. There’s plenty to like about all the personalities involved, but given the specific challenges Tobias and Mel face, I was glad they were allocated an entire novel for their story to unfold. J.R. Gray gives these characters a lot to contend with—their age difference, jobs, Tobias’s disfluency, etc.—and I enthusiastically cheered them on the whole way. I’m actually kind of sorry for the series to end at this point, but at least I can revisit them in the near future.

I should have been on top of the world but I was trapped, suffocated by fame. My life wasn’t my own. I belonged to the fans and the media. Too famous to leave my house without attracting a crowd. Fame and anxiety prevented a connection. I was doomed to stay a virgin forever, or so I thought until I fell for the one person forbidden to me: My director.

Four months of working side by side while trying to keep my hands to myself or one of us would lose our job. The temptation was going to kill me.