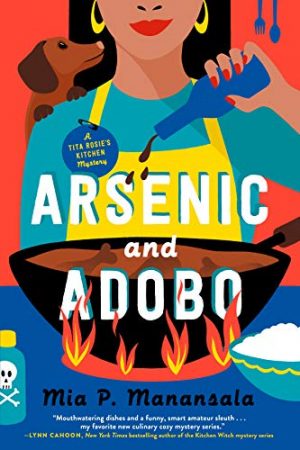 There is a darling classic comedy called Arsenic and Old Lace. The 1939 play, which ran on Broadway, was written by Joseph Kesselring. The play is about two elderly women, aunties, who poison their lonely boarders so they can die happy. It is their nephew who solves the mystery of what happens to the men who come to rent a room and never leave. It was made into a movie three different times, most famously in 1942 starring Cary Grant. That was my first thought when I heard Arsenic and Adobo was a “cozy mystery” involving food, arsenic, and lots of aunties. Unfortunately, it does not live up to unintentional the association.

Main character Lila has come home to help out at the family diner, leaving the big city after a bad break up. Her high school ex-boyfriend is the local food critic and he dies of arsenic poisoning, face first right into his dessert. It is Lila that police suspect of killing him and after the family puts everything on the line for bail money, Lila takes it upon herself to clear her name and save the restaurant. She has no shortage of aunties egging her on in her sleuthing.

Arsenic and Adobo wants to be many things, but doesn’t quite deliver on any of them. It wants most to be a mystery, but is easily solved well before the end. In complexity, it’s a step up from Nancy Drew with cheesy lines like, “Put on your sleuthing cap girl, we’re on the case!” It wants to be a romance, but aside from some awkward dates that are interrupted, there’s not even a goodnight kiss. Main character Lila has a two significant suitors, but doesn’t commit to either of them before the end of the book. Since this is labeled book #1 in the Tita Rosie’s Kitchen Mystery series, we can assume that will continue to build to some eventually satisfying conclusion ala Hallmark’s When Calls the Heart.

I liked the family characters, but I think the biggest issue I had with the book was how casual it felt. In an attempt to keep it “cozy” and light, there were too many responses which did not adequately reflect the gravity of the situation. After a bad break up, Lila comes home with her tail between her legs, but someone she knows closely dies in front of her and she doesn’t seem to be affected by it at all. I didn’t connect to her character almost at all. I doubt that I’ll pick up the next book in the series.

When Lila Macapagal moves back home to recover from a horrible breakup, her life seems to be following all the typical rom-com tropes. She’s tasked with saving her Tita Rosie’s failing restaurant, and she has to deal with a group of matchmaking aunties who shower her with love and judgment. But when a notoriously nasty food critic (who happens to be her ex-boyfriend) drops dead moments after a confrontation with Lila, her life quickly swerves from a Nora Ephron romp to an Agatha Christie case.

With the cops treating her like she’s the one and only suspect, and the shady landlord looking to finally kick the Macapagal family out and resell the storefront, Lila’s left with no choice but to conduct her own investigation. Armed with the nosy auntie network, her barista best bud, and her trusted Dachshund, Longanisa, Lila takes on this tasty, twisted case and soon finds her own neck on the chopping block…