Deeper Than the Ocean 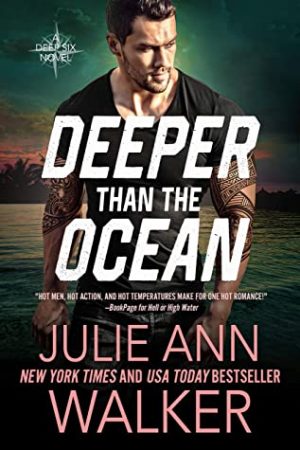 Deeper Than the Ocean is easily my favorite book in Julie Ann Walker’s Deep Six series. I think it’s because the focus has moved away from the treasure hunting plot from the previous books to the suspenseful mystery of a new plot line of attempted murder, drugs, cartel angle.

Also I really like the main couple this time around. Wolf and Chrissy’s story has been simmering since the first book and seeing it come to a HEA was very satisfying.

Chrissy is an independent woman who runs her own diving business. She met Wolf and the rest of the Deep Six gang because of their diving around a ship wreck area. She’s been bring her clients out to their small island in hopes with more eyes looking, the group will find a buried treasure. But Deeper Than the Ocean brings Wolf to Chrissy’s bigger island of Key West.

Wolf blew it with Chrissy when they ran into each other at a local bar, and there was a big misunderstanding that cooled off their sexy banter that was leading to some even sexier times. Fast forward to where Wolf is now helping to protect her from mysterious shooters who she and her best friend and business partner, Winston walked in on doing something not above board. Winston and Chrissy get shot at, she has to run for help and of course thinks of Wolf.

As the story progresses they can’t fight their sexual attraction any longer. Chrissy proposes they have a friends with benefits relationship. Wolf is not happy with this proposal, but figures if that’s what she needs to tell herself because she’s scared of falling in love with him, he’ll take what he can get from her, for now.

Deeper Than the Ocean is a great romance with laughs, a little danger and a whole lot of chemistry and sexual tension all ending with a HEA. You could read it as a stand alone but I recommend reading the whole series for the connections between the group of characters. They are all fun to get to know and I can’t wait for the next story, Shot Across the Bow, featuring Romeo and Mia.

Ray “Wolf” Roanhorse took one look at Chrissy and knew she was the woman of his dreams. There’s a hitch, however. He screwed things up with her. Big time. Now all she wants is to be friends. He’ll have to be his most charismatic and charming self if he has any hope of changing her mind. And winning her heart.

Christina Szarek knows all about sexy, brooding men like Wolf. She grew up watching her mother fall for – and be broken by – plenty of them. If she had her way, she’d avoid Wolf altogether. But they’re partners in the hunt for the Santa Cristina’s legendary treasure. Avoidance is impossible. And the longer she’s near him, the more he chips away at the walls she’s erected against him.

The danger to Chrissy doesn’t only come from her burgeoning feelings, however. There are mysterious players who would see her silenced – for good. And Wolf, with his wicked grin and spec-ops training, is all that stands between her and a date with death in the deep.