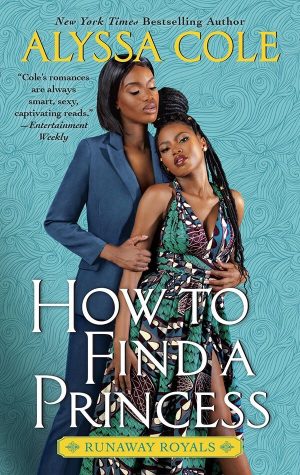 Makeda has a serious problem with setting boundaries. She would rather push aside her own hurt, disappointment, or frustration so she can tend to others. This has left her single, jobless, and in debt. Her Grandmore takes her in, where Makeda helps run their B&B.

Beznaria Chetchevaliere (we met her in the previous book) works for the World Federation of Monarchists. She’s from the Kingdom of Ibarania, and is in search of the country’s missing heir. She arrives at the B&B, wanting to take Makeda with her back to Ibarania based on a story Grandmore shares about having an affair with their king.

Makeda has a painful history with claims of being a princess-her mother was obsessed with being proclaimed royalty, and her obsession turned to addition. Makeda wants nothing to do with Ibarania, but decides to go along with the plan for two reasons – for the prize money and to prove to her mother she’s not a princess. Meanwhile, Beznaria wants to save the family’s name by bringing home the missing heir and clearing her grandmother of rumors she assassinated the missing queen.

How to Find a Princess had all the makings of a wonderful story, but unfortunately fell flat. I really wanted to love it, but honestly, I should have DNF’d it (It took me three weeks to finish it). I enjoyed seeing Makeda learn to take charge of her life, accepting and embracing her own quirks while no longer allowing others to use her. I admire that she learns to love herself and can make changes without sacrificing her genuine kindness and compassion.

Beznaria, on the other hand, is not a likable character. She is pushy to the point of annoying, and she is extremely selfish. She manipulates Makeda time and time again, convincing herself that her motives and lies are for the greater good, but the greater good is really just her own personal cause. She’s given ample opportunities to come clean and clear the air, yet she continues to hide the truth from Makeda.

The pair continue their charade for the entire book, with a “true connection” coming well into the narrative. Although there is a strong attraction between the pair from the beginning, there was no like for much of the story. There would be glimpses of connection outside of lust, but very little true romantic development. Beznaria’s obsession with clearing her grandmother’s name overshadowed the story, and it never clicked with me. In the end, How to Find a Princess did not work for me.

My Rating: C- Finished It — Liked a little, didn’t like a lot

Makeda Hicks has lost her job and her girlfriend in one fell swoop. The last thing she’s in the mood for is to rehash the story of her grandmother’s infamous summer fling with a runaway prince from Ibarania, or the investigator from the World Federation of Monarchies tasked with searching for Ibarania’s missing heir.

Yet when Beznaria Chetchevaliere crashes into her life, the sleek and sexy investigator exudes exactly the kind of chaos that organized and efficient Makeda finds irresistible, even if Bez is determined to drag her into a world of royal duty Makeda wants nothing to do with.

When a threat to her grandmother’s livelihood pushes Makeda to agree to return to Ibarania, Bez takes her on a transatlantic adventure with a crew of lovable weirdos, a fake marriage, and one-bed hijinks on the high seas. When they finally make it to Ibarania, they realize there’s more at stake than just cash and crown, and Makeda must learn what it means to fight for what she desires and not what she feels bound to by duty.