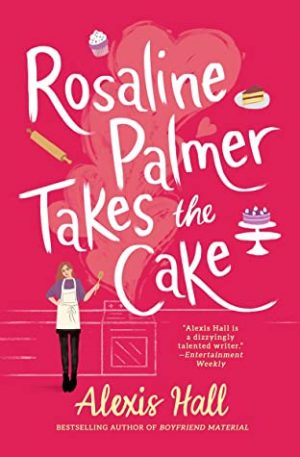 Rosaline Palmer Takes the Cake has been among my most anticipated reads of the entire year, and I won’t pretend I’m not thrilled that it is as delightful as I’d hoped it would be. I laughed and cringed (in an into the story way, not the other kind), and even blushed a little here and there. It’s impossible to avoid the obvious clichés, given that it involves the baking of sweets, but this really is a sweet tale of second chances, and one that I enjoyed tremendously.

Content Warning: I feel obligated to add a warning here about a scene involving non-penetrative sexual assault between two of the female characters. While completely non-gratuitous, as well as being both brief and purposeful, it did involve the violation of boundaries. “No” and “Stop” were unambiguously expressed and summarily ignored, and some unforgivable gaslighting immediately followed. Ultimately, repercussions happened and lessons were learned, and I don’t see how it could have been handled any better.

Though I’ve ordered the paperback for my favorite bookshelf, I read the ebook version of Rosaline Palmer Takes the Cake for this review. I don’t usually document my reading journey so precisely, but I sort of enjoyed doing so in this case, because it was so much fun. At 22% I was hopeful, but with a side of niggling doubt. At 34% my opinions were shifting so hard my neck twinged. By 57% through I’d officially arrived at the “oh HELL no” stage. And by 73% I was undeniably in love, just nowhere close to my initial suspicions. And it was fairly perfect.

One of my favorite elements of Mr. Hall’s stories is that they don’t so much make me think about things as they provide me with plenty of reasons to desire to, which seems to me a very generous means of storytelling. Rosaline Palmer Takes the Cake is the same in several respects, but there’s a particular conundrum that I especially appreciated. It concerns wanting—the difference between what others expect us to want, what we believe we’re supposed to want, what might be wrong with us if we don’t want those things, not having any idea what we really want in the first place, and, if we’re lucky, finally figuring out what it is we truly do want. Immersing myself in those questions from Rosaline’s perspective turned out to be highly rewarding. Of course, satisfying those wants turns out to be another crisis entirely.

Unsurprisingly, the author has filled Rosaline Palmer Takes the Cake with characters that very nearly live and breathe on the page. Rosaline is a sharp, captivating work in progress, and I loved watching her come to the realization that she is a being of potential. Also amazing are Rosaline’s daughter, Amelie, her ex-girlfriend, Lauren, a number of her co-contestants, and so on. Even the scenes involving her parents provide a valuable point of view that might not have had the same impact had they been seen from memory or flashback. As for Rosaline’s current love interests, I have no doubts whatsoever about either my loathing of one or adoration of the other.

In summary, Rosaline Palmer Takes the Cake is one of my new favorite stories of the year so far. There’s so much more I’d really like to delve into. Rosaline’s bisexuality is among the most important aspects of the narrative, but is better left to the pages it’s found on. Another is realizing that needing and/or accepting help should never make us feel we’ve forfeited the right to reject it if that assistance becomes an obligation owed. I also now have an entire folder of bookmarks dedicated to “Rosaline’s Recipes and Things.” And on it goes, as a well-loved story does.

One more thing: please don’t miss the recipes at the end. I can’t decide between trying the “Cheesy Bites” or the “Shortbreads”/“discrimination biscuits” first. Either should be safe. And, though I’d never attempt to actually make anything with them, I do, in fact, know what ceps are now.

Following the recipe is the key to a successful bake. Rosaline Palmer has always lived by those rules—well, except for when she dropped out of college to raise her daughter, Amelie. Now, with a paycheck as useful as greaseproof paper and a house crumbling faster than biscuits in tea, she’s teetering on the edge of financial disaster. But where there’s a whisk there’s a way . . . and Rosaline has just landed a spot on the nation’s most beloved baking show.

Winning the prize money would give her daughter the life she deserves—and Rosaline is determined to stick to the instructions. However, more than collapsing trifles stand between Rosaline and sweet, sweet victory.  Suave, well-educated, and parent-approved Alain Pope knows all the right moves to sweep her off her feet, but it’s shy electrician Harry Dobson who makes Rosaline question her long-held beliefs—about herself, her family, and her desires.

Rosaline fears falling for Harry is a guaranteed recipe for disaster. Yet as the competition—and the ovens—heat up, Rosaline starts to realize the most delicious bakes come from the heart.