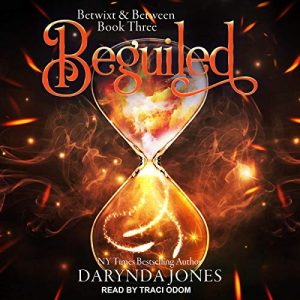 Beguiled picks up Defiance’s story about a day or so following the conclusion of the previous book. Roane wants to deepen his relationship with Defiance, but she is leery after her two failed marriages. Meanwhile, someone keeps adding poison to the gang’s food, and they wonder if it is connected to GG’s murder.

Beguiled is another entertaining tale in the Betwixt & Between series. I enjoyed watching Defiance develop her powers and deepen her relationships with her both her new-found friends and family, as well as with long-time buddy, Net. We continue to learn more about the witching world alongside Def, and it is clear her life is in danger.

Defiance and her friends experience a number of changes within the story. Def gets the answers to some outstanding questions, just as new ones pop up. I like the forward momentum of the series, with each book adding more to the overall plot lines. Even though there is much happening to and around Defiance, the story doesn’t become overwhelming or lose focus.

I did find a few things that annoyed me a bit. First, is the relationship between Def and Roane – don’t get me wrong – I like them together, but several aspects remind me too much of Charley Davidson and Reyes, and I want something different than what I’ve already read. Additionally, there is something BIG that happens to one of the gang, and it felt just a little too convenient. With that said, these things only bugged me slightly and for a short while.

Narration: Ms. Odom provides a delightful performance as the first person POV, 40-something Defiance. She exudes a somewhat harried, yet somehow calm woman who is taking one day at a time. I found her array of female characters unique and fitting. Both females and males are adjusted appropriately for age. Overall, her males are deeper, but soft and whispery sounding rather than masculine. However, with that said, I’m used to her male voices, especially Roane, because they don’t annoy me as much as they did the first time around.

In the end, I continue to enjoy the Betwixt & Between series. It’s perfect for fans of lighter urban fantasy and/or the Charley Davidson series. It’s filled with lots of zany humor, best friend shenanigans, and powerful magics.

Newly indoctrinated witch, Defiance Dayne discovers there’s more to life after forty than she’d ever imagined possible. Especially if one is a charmling, one of only three in the world, with enough magics to make her a target for every power-hungry warlock out there. When one of them sends a hunter to town, she knows it’s time to take her talents seriously before the hunter takes her life.

She decides she has three things to do before she can die. Find out who killed her beloved grandmother, teach her BFF the finer points of spellcasting before she blows up the world, and figure out how serious her relationship with the Adonis living in her basement really is. If it’s heading in the direction she’s hoping for, she can die happy. Though, admittedly, she’d rather not. Die. Happy or otherwise.