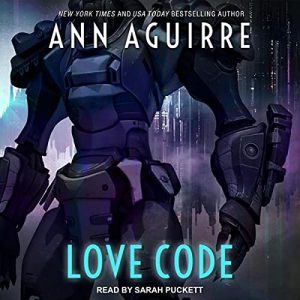 When Helix wakes from a crash on a distant planet, not only are his memories from the past half cycle missing, but he’s been changed. Once a bodiless A.I. who lived on a ship, Helix is now an organic being. Qalu, a brilliant Tiralan scientist saved him by putting his code into a host she grew in her lab. Qalu lives a solitary life, working to advance her field in secrecy. When Helix crashed so close to her lab, she makes the split decision to save him, hoping he will survive the transition.

Love Code is the second story in the non-traditional sci-fi Galactic Love romance series. Loosely connected to the first title by main character Helix, it can be enjoyed as a standalone story. The book is filled with high adventure, close calls, and tender love. While Love Code is a romantic adventure, the story addresses issues such as bigotry and gender fluidity through entertaining storytelling.

Ms. Aguirre creates main characters who are strong, kind, and compassionate, striving to better themselves and to become better partners. I enjoyed watching both learn and grow of the course of the story. A scientist at heart, Qalu is excited about her technological break through, yet quickly she realizes her discovery would mean a life of experiments for Helix. She is attracted to Helix, but refuses to cross any lines since she is his maker and he relies on her to survive (at first).

I also enjoyed seeing Helix evolve. The author did a very good job of showing him go from a robotic A.I. to fully functioning organic being. There are some humorous scenes when Qalu must explain bodily functions and proper etiquette. Helix and Qalu learn that open and honest communication allows for a closer, stronger bond, something rarely seen in most relationships. They are an example of all that is good.

Narration: The story is shared via the third person POV of both Qalu and Helix. The narrator speaks in a soft, somewhat breathy female voice which remains the same for both POVs. She adjusts her voice for dialogue, deepening it slightly for male characters. Each being has a unique voice suited to the character’s species, gender, and age. My only (small) issue was the the assassin’s voice is described as very deep like rocks being dragged across the ocean floor; however, it wasn’t very deep.

Love Code is entertaining alien adventure romance that defies the norm, bringing together two souls so different yet so similar.

He’s cute. He’s cranky. His code is sleek as hell.

What’s an amnesiac AI doing in a place like this? Helix has no idea. He knows he planned to build a life for himself on Gravas Station, but he has no clue what he’s been doing for the last half cycle. Nor does he understand why his ship crashed. A genius Tiralan scientist saved him by copying his code into an organic host, and after meeting her meddling mothers, it seems like his problems have only just begun…

She’s clever. She’s creative. She claims that he’s her mate.

Qalu has no interest in relationships. She’d much rather be working in her lab, innovating instead of socializing. Problem is, the Tiralan believe that one cannot be happy alone. When a solution literally falls from the sky, she leaps at the opportunity to advance her research and teach Helix how to be Tiralan while calming her mothers’ fears. It might be unconventional, but she’s ready to break all the rules for a little peace.

They agree to pose as each other’s mates for the most logical reasons, but love always finds a way.