Audiobook review: Sweetest in the Gale by Olivia Dade 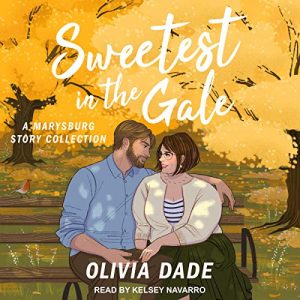 Sweetest in the Gale is a three-story collection of romances from the There’s Something About Marysburg series. Each is a standalone romance, although the first two have direct character ties. I’ve got my thoughts on each:

“Sweetest in the Gale”

Widower Griff is concerned about his classroom adjacent colleague, Candy. He worms his way into her life and realizes he’s falling in love with Candy. Shared entirely from Griff’s POV, we learn how his feelings for Candy confuse and upset him because he feels he’s betraying his deceased wife. It’s a lovely story about loss, grieving, and finding hope again. Griff and Candy’s story is a sweet, slow-burn romance that I rather enjoyed.

I originally read this as part of the He’s Come Undone anthology; it has a new epilogue. Similarly to the first story, it is told solely from the male’s POV. Math teacher Simon seems to be looking for issues with his mentee, new art teacher Poppy. She gracefully but meaningfully rebuffs his assumptions and critiques of her class work. “Unraveled” is messy and chaotic, and equally as lovely. I loved listening to this one immediately after the first story because there is some crossover with the characters. I love that until Poppy, Simon never thought that a romantic relationship could mean the whole is greater than the sum of the parts.

CW: This story deals with breast cancer fears, with an on-page mammogram and breast biopsy.

Unlike the first two stories, “Cover Me” is shared via an alternating POV between the two main characters. Elizabeth has lost her health insurance and is in need of a biopsy right away. She turns to her longtime (30 years) friend, James, for emotional support. James and Elizabeth were close friends and roommates in college, but over the years, his addictive-disorder wife and the troubles she raised, caused them to drift. In order to help her, James proposes a temporary marriage, but intends to convince her to stay.

Since we see the story from both POVs, we know that each has always loved the other – not in love, but a deep, caring kind of love. And neither wanted to jeopardize friendships, marriage, etc., so they stayed at arms length. The story is somber and real with Elizabeth’s health issues. But it’s also hope and light as the pair fall in love and realize they were always meant to be. I enjoyed this one, but not as much as the first two. It is much more serious, but still very lovely.

Narration: The narrator uses a fantastic neutral, feminine voice for all stories and POVs. She adjusts her tone and clip for dialogue; her males slightly deeper, softer. Each character has enough variance to make them identifiable as a separate individual. There is softness and light in the tone, and the narrator does a good job of expressing emotion in dialogue. She breathes life into Ms. Dade’s characters; her style a wonderful fit for the stories and characters.

Sweetest in the Gale is a lovely collection of stories from Olivia Dade. I adore everything about Ms. Dade’s storytelling. She creates real, breathable characters who live messy lives filled with joy and sorrow, ups and downs. Her stories have friction but without the drama of unnecessary or contrived conflict. Her MCs are thoughtful and kind, generous of themselves and willing to admit when they are wrong.

My Ratings
Book/Stories: B+
Narration: A-

“Sweetest in the Gale”: Much ado about love…

Candy Albright has always stomped confidently through the halls of Marysburg High, passionate and loud and entirely devoted to her students and her various English department initiatives. From his first day as her colleague, Griff Conover couldn’t look away, despite his best efforts.

After a summer apart, though, Candy returns to school a changed woman. Muted. Dimmed. Bowed by a grief Griff recognizes all too well, but doesn’t yet understand. And when they’re thrown together to coordinate a poetry project, he can’t resist the urge to read between her lines once and for all–even if doing so means he’ll have to confront his own loss…and his own lonely, longing heart.

“Unraveled”: The more tightly wound a man is, the faster he unravels…

Elizabeth Stone has no health insurance. No savings. No one to turn to when she finds a lump on her breast…except James Magnusson, her friend of over twenty years. When he offers her a marriage of convenience for healthcare coverage, she’d be a fool to say no. But given the emotions she’s buried for so long, saying yes might lead to a broken heart.

James won’t take no for an answer. Not when marriage could save Elizabeth’s life, and not when he’s finally realized how much he needs her. Even during his doomed first marriage, James considered Elizabeth a special friend–one he had to keep at a safe distance. Now he’s free, and Elizabeth is his wife…but will they finally have the chance to be together, only to have everything torn apart?

Content guidance for “Cover Me”: This story contains discussions of breast cancer, an on-page mammogram and biopsy, and a definite happily-ever-after.

This book contains one entirely new story (“Sweetest in the Gale”) and two stories previously published in the He’s Come Undone and Rogue Acts anthologies. The latter stories have been lightly edited since their original publication, and “Unraveled” has a new epilogue.