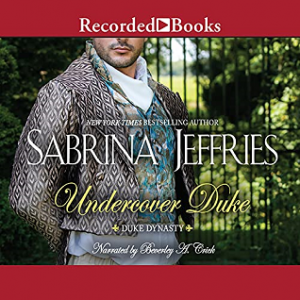 The Duke Dynasty series is an entertaining historical romance series featuring a dowager duchess who was married and widowed by three different dukes. She has five grown children – three are dukes themselves. Undercover Duke, the fourth (and final?) full-length tale, features youngest duke Sheridan and Vanessa, cousin to the eldest duke, Grey (first book). Although the story is a standalone romance, there is a murder mystery that runs throughout the series, building upon the events of previous books; therefore, it is best to start with the first book.

In addition to trying to discover who may have killed his uncle and father, Sheridan is struggling financially. He never plans to marry, but does fancy Vanessa and will use his loose friendship with her to question her mother in regards to the deaths of the various dukes once married to his mother.

Vanessa has only had eyes for Sheridan ever since they first met; however, everyone thinks she’s in love with playwright and poet, Janka. In order to spend more time with Sheridan, she convinces him to pretend to court her to make Janka jealous.

I have really enjoyed the Duke Dynasty series, finding the concept original, and the multiple-book murder mystery engrossing. I’ve enjoyed getting to know the characters over time, and like the pairing of Sheridan and Vanessa. With that said, I was not overly found of scheme upon scheme as a means to get the pair together. Although they share a strong mutual desire, their entire “courtship” is a set of compounding deceptions and subterfuge. Even after they wed, they keep secrets from one another; she’s worried he’ll be upset she lied, he doesn’t think she needs to know because he’s not in love with her. I will admit I rolled my eyes a couple times because the characters’ logic wasn’t the brightest. I also felt Vanessa was way too naive when it came to “bed sport.”

Once the pair finally opened to one another, I liked them better as a couple. They work together and value each other. This is important when trying to solve a murder mystery. I did figure out who did it (guessing back in the third book), although the reasoning wasn’t clear until the very end. Regardless, I enjoyed this aspect of the series/story a lot.

Narration: The story is shared between the alternating POVs of Vanessa and Sheridan. Ms. Crick uses the same delightful British female narrator for both POVs. The dialogue is adjusted slightly based on age and station, with a more deliberate contrast between her male and female characters. Her female voices all light and slightly different. Her males are deeper and convincingly masculine. To this untrained ear, the accents appear to be appropriate for the setting and period.  She adds appropriate emotion as called for, and overall adds value to the listening experience.

In the end, I really enjoyed the Duke Dynasty series, and the although the final book wasn’t my favorite, I liked the pairing of Sheridan and Vanessa, and liked following the mystery until the very end.

My Ratings
Story: B/B-
Narration: B

Along with his step-siblings, Sheridan Wolfe, Duke of Armitage, is determined to finally solve the mysteries behind the suspicious deaths of their mother’s three husbands. Tasked with investigating a possible suspect, Sheridan finds himself in dangerous proximity to her captivating daughter, Vanessa Pryde. But still haunted by a tragically lost love, the duke is resolved to resist the attraction – and avoid any “scheming” husband-hunters. Besides, lovely Miss Pryde seems utterly smitten with a roguish London playwright…

Vanessa thinks a little scheming may be in order – or it’s Sheridan she truly has her sights, and her heart, set on. Her theatrical flirtation is intended only to break through his business-like demeanor and guarded emotions. And as Sheridan’s jealousy becomes aroused, the two soon find themselves propelled into a scheme of an altogether different kind, involving a pretend engagement, a secret inquiry – and a perhaps not-so-secret leap into true love…