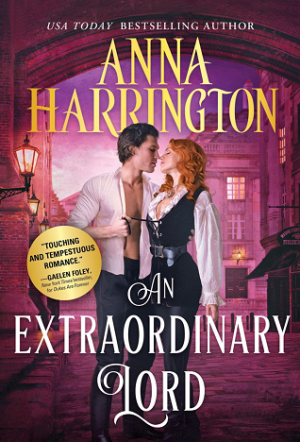 After his service in the army, Merritt was made a baron by the prince regent. He spends his days as a barrister and his nights hunting criminals on the streets of London. He’s also been tasked by the Home Office to find out who is organizing the riots in the city. On his hunt for an escaped convict, Merritt runs into a female thief-taker. Sparks fly. They are equally matched in sword play. He is immediately attracted to her. But when he asks her name, he finds out she is the criminal he’s hunting.

Veronica lives on the streets after moving to London from Portugal. She is innocent of wrongdoing, but confessed to the crime of another to protect her foster brother Filipe, who guards their community of poor. After being caught by Merritt, she agrees to help the Home Office discover who is behind the riots in exchange for a full pardon.

An Extraordinary Lord is the third title in Ms. Harrington’s delightful Lords of the Armory series. I’m enjoying the overarching storyline following the mysterious and devious group, Scepter. I enjoy its darker aspect and how it gives mystery to the stories, and especially how it connects each book. Merritt and his brothers at the Armory are determined to discover Scepter’s connection to the unusual riots. However, Merritt has a personal stake in the his search for answers: his fiancée was brutally killed in a mob riot five years ago. He is determined to have his revenge, and this drive takes his heart to a dark place. His motives, while justified, are a bit one-dimensional and honestly, I wish he’d been able to get past Joanna’s death sooner than he did.

Veronica is a wonderful, modern heroine. The daughter of a Portuguese Count, she lost everything when invaders killed her father. She’s surviving in London, but being with Merritt, she recognizes that she doesn’t fit into her current life, but she can’t upgrade into society either. Veronica is a three-dimensional character, full of life and experiencing so many emotions. She gives herself to Merritt, knowing he will never fully accept her, a criminal, and knowing he is still haunted by his deceased fiancée. In fact, Merritt’s conflict over the fact that she’s a criminal becomes repetitive as he constantly must remind himself in order to counter his attraction to Veronica.

An Extraordinary Lord is another engrossing adventure with ties to Scepter. The Lords of the Armory still don’t know who is the ultimate mastermind, but they do know Scepter’s end game. I liked the match of Veronica and Merritt – both unique individuals and hardened fighters. They work together well, a team, once he gets over his need to protect her and his haunted memories of Joanna.

Soldier turned solicitor Lord Merritt Rivers has dedicated his life to upholding the law. He patrols the streets faithfully, hoping to stop crimes before they can happen. While hunting an escaped convict, he encounters a woman also hunting thieves. She’s a delicious distraction, until he discovers that she is the criminal he’s after. She’s smart, challenging, and everything he finds attractive, but he cannot trust her.

Veronica Chase has hidden her past as a nobleman’s daughter. She confesses to a crime to keep her adopted brother out of prison. She now lives in London’s underworld, trapped between worlds, belonging nowhere.

Forming an uneasy alliance, Veronica and Merritt work together to protect innocent Londoners during the city’s riots. Moving between her world and his, they grow closer to each other and to the mob’s dangerous leaders. But their newfound trust won’t be enough, until each face their demons and ask what’s worth saving―the lives they’ve chosen to lead or the love that leaves them yearning for more.