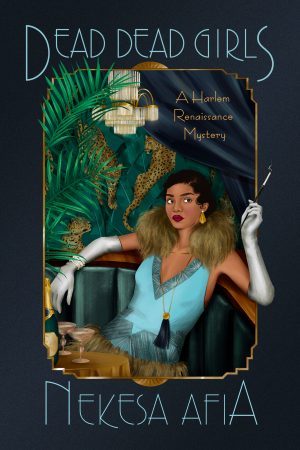 “She had been a showgirl, a waitress, a lover, a dancer…And now she was a detective too.”

And this is the clearest introduction I can offer for the excellent Louise Lloyd, main character of Dead Dead Girls, the debut novel by Nekesa Afia. Of course, Louise doesn’t arrive at that realization about herself until well into the narrative, but I still think it’s an ideal description. Set in 1926 Harlem, New York City, Dead Dead Girls follows the reluctant (at least initially) transformation of Louise from waitress/club dancer to a murder mystery solving detective amid the racism and criminality of Prohibition.

I think it’s important to emphasize that Dead Dead Girls deals with mature subjects, and is not suitable for younger audiences. While the actual murders aren’t enacted on the page, the fatal wounds of the victims are described in detail (though, I believe “delicacy” in this case would not only be ineffective, but absurd). I should also add a content warning for an on-page near rape, which is ultimately avoided, but not before the main character is subjected to violence. Still, this is a suspense/murder mystery, and the author has some significant points to make, so it’s fitting.

I briefly tried to make a comparison between various suspense novels I’ve read that might be relatable in a review, but I don’t think there are any. Dead Dead Girls is unlike anything else, placing it solidly in my “keeper” column. Given that it’s set in the 1920’s I had some concerns about the potential overuse of jargon from the period, but what little was used was done so in a way that felt naturally spare and utilitarian. Instead, there are plenty of other things woven together to keep the narrative within the author’s chosen time and place, and her skills regarding the application of these techniques to her storytelling was very welcome.

As a whodunit, Dead Dead Girls did not disappoint. Given that Louise is a young, beautiful black woman during the 1920’s—not to mention her own personal history—feelings of unease and distrust are simply an everyday part of her world. So, as different characters add to her frustration, her second-guessing and irritation make perfect sense as well as clouding the trail to the real killer. And if that wasn’t enough to keep the audience on edge, when things seem too good to be true two-thirds of the way through a narrative, you know the whole situation is about to get ugly.

Dead Dead Girls is not an easy story. It felt heavy and significant, and I’m grateful I had the opportunity to read it. It is a forthright exhibition of the ever-present racism in our country that neither innocence nor youth can escape, both being so viciously disregarded under the symbiotic institutions of prejudice and hatred. But, it is also a well-crafted mystery with a touch of sweetness here and there that was thoroughly rewarding to experience. Unmasking the murderer was only part of Louise’s journey, and watching her deliver justice was very much a darkly satisfying thing. Though I didn’t see any information about the next novel in the Harlem Renaissance Mysteries, I have no doubt it will be just as wonderful.

Following a harrowing kidnapping ordeal when she was in her teens, Louise is doing everything she can to maintain a normal life. She’s succeeding, too. She spends her days working at Maggie’s Café and her nights at the Zodiac, Manhattan’s hottest speakeasy. Louise’s friends might say she’s running from her past and the notoriety that still stalks her, but don’t tell her that.

When a girl turns up dead in front of the café, Louise is forced to confront something she’s been trying to ignore–several local black girls have been murdered over the past few weeks. After an altercation with a local police officer gets her arrested, Louise is given an ultimatum: She can either help solve the case or let a judge make an example of her.

Louise has no choice but to take the case and soon finds herself toe-to-toe with a murderous mastermind. She’ll have to tackle her own fears and the prejudices of New York City society if she wants to catch a killer and save her own life in the process.

“Lovie,” the bartender, Rafael Moreno, greeted her. He leaned over and kissed her forehead. “Everything copacetic, baby doll?”

Louise smiled and pulled her hair from her lipstick, her pulse slowing. “Everything’s jake, babe.”

“And how.” She leaned over the bar and pulled her purse out. Rafael kept watch over it while she danced. It was the major benefit to being best friends with the bartender. She pulled out a cigarette, lit it, then checked her makeup in her compact mirror. Her lipstick had smeared, and she began to reapply it.

“Gin, Lovie?” Rafael asked. Rafael Moreno was many things, devastatingly handsome for one: his dark hair was always neatly parted, his brown skin perfectly sun-kissed, his eyes dark and beautiful. He had the unique ability to make a girl weak at the knees with his one-dimpled smile. Rafael had been there the first time Louise had walked into the Zodiac, and he’d remained a constant ever since. The moment he had found out her middle name was Lovie was the moment he started using it and nothing else for her.

“Yes, please.” Louise winked. It was their own little nightly dance. He placed a glass in front of her and began to pour. Her attention drifted to the dance floor, where the couples were swaying romantically.

“Never better.” Louise drained half her gin and placed her glass on the bar. She passed the dizzy state she liked to stay in and was officially drunk. Rafael was watching his sister on the floor, lips slightly pursed. It was that small thing that told Louise he was jealous he had to stay behind the bar.

“Please.” Rafael often hated that this job put him so close to something he loved to do. Both Moreno siblings were sensational dancers, and Louise sometimes struggled to keep up.

“I heard some man asking after you,” Rafael said as he watched the dance floor. Louise rolled her eyes. Their conversations had to be shoved into the few minutes Louise wasn’t dancing. They’d learned to keep it to the important details. “I told him you weren’t interested.”

“Much appreciated.” She tried to find the man Rafael was talking about in the crowd.

“The same could be said about you.”

“But I do it with style.” Rafael winked. “Over there. Handsome. Tall.”

Louise looked to where Rafael was pointing. The man in question didn’t notice them. He was oddly dressed—everyone in the Zodiac wore their best, but his jacket was shabby, and something was off about him. His hat was pulled low over his eyes, and he stuck to the shadows of the club. He was an outsider. Louise turned back to her friend and raised an eyebrow.

“You know me.” She sipped from her glass, trying not to let the bootleg alcohol stay in her mouth too long. “I’m happy where I am. How can you tell he’s handsome if you can’t see him?”

“Every man that tall is also handsome.” Rafael placed the glass he was cleaning under the bar and tossed the rag he was using over his shoulder.

Louise scanned the floor, ready to go again when the band picked up the pace. She hated being on the sidelines, away from the action. She hated watching. She looked back to where the man had been standing. He was gone.

The band changed songs after polite applause, throwing themselves into something with a faster pace. Louise placed a couple of dollar bills on the bar and whisked back onto the dance floor. It was Rosa Maria’s turn to race to the bar.

In a world where women got so little and Black women got even less, she had to be better.

However, at twenty-six years old, all she really wanted to do was dance.