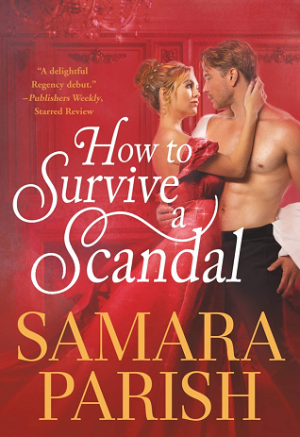 How to Survive a Scandal
Author: Samara Parish
Reviewer: Jen
Rating: B

Benedict finds Lady Amelia freezing and nearly dead, abandoned in her carriage. So he rescues her and takes her to his barn where he tries to warm her up and save her. However, when her father and fiancé, the Duke of Wildeforde show up, they find her partially undressed and alone with a male… i.e. she’s been compromised, and the duke calls off the wedding. Her father insists Benedict, a land owner and businessman, marry his ruined daughter, much to the dislike of both Benedict and Amelia. However, when her father offers a large dowery, Benedict figures marrying Amelia is worth the hassle.

How to Survive a Scandal is an entertaining story. I always enjoy strong-willed women who defy societal norms, and Amelia is definitely one. She starts the book trapped in the in between. She was raised to be a duchess and feels like a failure because she believes her value is in who she marries. Yet once she settles in, she loves her new life. Her ties to both worlds cause conflict, as she cannot figure out where she wants to be and refuses to let go of either life. I love that she truly wants to make Benedict’s life better/successful, and she works hard to get him the advantages he will need to be successful, even if he refuses to see the advantages.

Benedict has a major chip on his shoulder. His mother, the daughter of a marquess, never recovered from her ousting from the ton after marrying a footman for love. Benedict both refuses to forgive the ton and believes Amelia could ever be happy with him. It took me a while to warm up to Benedict because so often I felt he refuses to try or compromise. His anger clouds his better judgment, and although he eventually makes a grand gesture, it takes a long time.

Benedict and Amelia’s romance has a lot of ups and downs as they learn to trust one another. The problem is Benedict can’t let go of preconceived notions, even when they have been proven wrong. Meanwhile Amelia remains torn over wanting both the aristocracy’s and the village folk’s acceptance. The couple has periods of happiness until something pokes at their bubble, causing their relationship to backslide. While it takes some time, the pair come to find true love and happiness.

Lady Amelia was raised to be the perfect duchess, accomplished in embroidery, floral arrangement, and managing a massive household. But when an innocent mistake forces her and the uncouth, untitled Benedict Asterly into a marriage of convenience, all her training appears to be for naught. Even worse, she finds herself inexplicably drawn to this man no finishing school could have prepared her for.

Benedict Asterly never dreamed saving Amelia’s life would lead to him being shackled to the hoity Society miss. Benedict was taught to distrust the aristocracy at a young age, so when news of his marriage endangers a business deal, Benedict is wary of Amelia’s offer to help. But his quick-witted, elegant bride defies all his expectations… and if he’s not careful, she’ll break down the walls around his guarded heart.