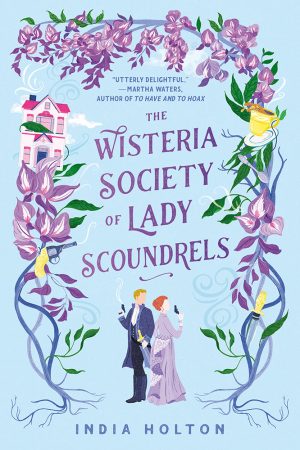 Cecilia Bassingwaite is a respectable member of the Wisteria Society, excited that she’s attracted her first assassination attempt. She’s long desired a promotion within the group of lady scoundrels, and she’s certain this will be the catalyst. Ned Lightbourne, sometimes pirate, sometimes assassin, and sometimes one of a dozen other professions, takes the contract to kill Miss Bassingwaite, but he also works for her pirate father, tasked with kidnapping her.

The Wisteria Society of Lady Scoundrels is a zany historical romance that features polite pirate ladies who fly houses while looting the English countryside. The premise is silly and fun, filled with several off-the-wall zingers and crazy thieving antics. I love a good parody, and while the book isn’t necessarily spoofing the historical romance genre or a specific piece, overall it reads as such. With that said, after a while the droll humor started to interrupt the flow of the book. At times the book felt choppy, and it made it difficult to stay submersed in the storyline.

Cecilia, the always obedient niece to society matriarch Miss Darlington, longs to kill her disgraceful father and branch out on her own. Something sparks within her after meeting Ned, and she starts to imagine a life away from her aunt. Her struggle is the heart of the story and what makes The Wisteria Society of Lady Scoundrels a good book. She’s treated like a frail child and kept out of the inner circle for reasons that are hypothesized but never fleshed out. Yet she remains loyal and wants to be the perfect pirate. Even after Ned points out the irony of following the rules to being a scoundrel, she cannot break free of her gilded cage. The last 20% or so of the book was my favorite. While there are still silly shenanigans and outrageous banter, Cecilia’s plight is moving and my heart hurt. She is sacrificing love for her career, yet the Wisteria Society seemingly doesn’t want to promote her.

While it took me some time to get through the book, in the end, I rather enjoyed it. I love the mix of silliness and magic tossed into a twisted Victorian history. I can’t imagine what adventures are ahead, but I look forward to joining the Wisteria Society and flying off into the sunset.

Cecilia Bassingwaite is the ideal Victorian lady. She’s also a thief. Like the other members of the Wisteria Society crime sorority, she flies around England drinking tea, blackmailing friends, and acquiring treasure by interesting means. Sure, she has a dark and traumatic past and an overbearing aunt, but all things considered, it’s a pleasant existence. Until the men show up.

Ned Lightbourne is a sometimes assassin who is smitten with Cecilia from the moment they meet. Unfortunately, that happens to be while he’s under direct orders to kill her. His employer, Captain Morvath, who possesses a gothic abbey bristling with cannons and an unbridled hate for the world, intends to rid England of all its presumptuous women, starting with the Wisteria Society. Ned has plans of his own. But both men have made one grave mistake. Never underestimate a woman.

When Morvath imperils the Wisteria Society, Cecilia is forced to team up with her handsome would-be assassin to save the women who raised her–hopefully proving, once and for all, that she’s as much of a scoundrel as the rest of them.