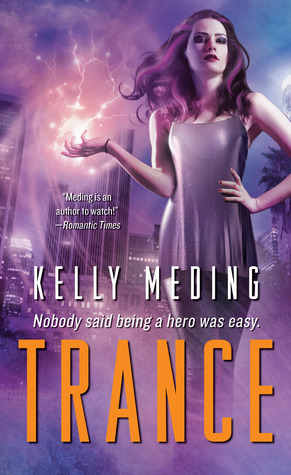 Trance has an X-Men feel to it. You have good and evil superhuman beings. The Metas are the white hats (good guys) and the Banes are the bad guys. They all have their own special powers.

They were in the middle of a war about 15 years ago and things were not looking good for the Metas. The Banes were poised to win the war when all of a sudden the Banes and Metas lose their powers.

There was a small group of tweens and teens who lived on the Meta side. They were all shipped off to foster homes in the hope they would grow up in “normal” families. But after 15 years they have grown up and then just as suddenly as they lost their powers, they regain them. But our heroine, Trance gets a different and more powerful set of powers.

Now that the Metas are re-grouping and trying to figure out what the hell is going on, Trance finds herself as their leader. This is a far cry from her life of working 3 lousy jobs to try to keep a roof over her head and food in her fridge.

As the 12 living Metas try to make their way to HQ, half is taken out by the badass leader of the Banes. The remaining Metas are working on how to be a team and how to deal with some of the romantic relationships that are building between some of them.

Trance is a very fast-paced urban fantasy story with action, magic, and mayhem with a little romance on the side.

Fifteen years ago, Teresa “Trance” West was a skilled telepath and a proud member of the Ranger Corps. But ever since the Rangers were inexplicably rendered powerless at the climax of the devastating Meta War, she’s bounced from one dead-end job to another. Now her powers have reappeared just as mysteriously as they vanished— only they’re completely transformed and more potent than ever. And they’re threatening to destroy her.

Trance heads to Los Angeles to track down the surviving Rangers and discover who restored her powers—and why—but a phantom enemy is determined to kill them before they can reassemble. As they dodge his deadly attacks and come to terms with their new role as heroes, Trance and the rest of the team set out to annihilate the sinister madman… only to discover their own powers are his greatest weapons.