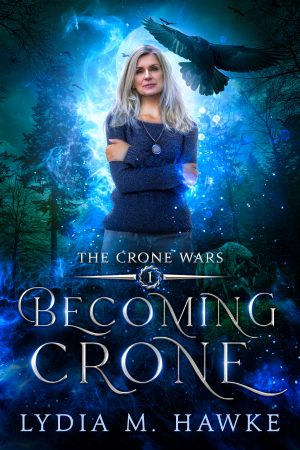 I stared at the plaque for long seconds, my arms wrapped around my midsection and the hair standing on end along them. This had gone beyond weird. It was downright creepy. The address in my newspaper had been a figment of my imagination; there was no such road as The Morrigan’s Way in Confluence; and a gate could not magically appear in the woods where no houses existed.

Run, my cautionary voice urged again. Run now, while you still can. Before…

I shifted my gaze to the gate. What would I find down the path just visible in the deepening shadows? Would there be an imaginary house to go with the imaginary address that had brought me here? Did I have the nerve to find out?

One of my hands drifted out to settle on the cold iron, as if of its own accord.

Hold on, Claire. Think this through. No one knows where you are; you have no cell phone with you; and even if you leave now, it will be dark before you get home. This is not the time to be wandering off alone into the trees.

Except a gatepost with the same address on it that I’d seen in my newspaper.

Except a gate with a path on the other side.

Except what was the harm if I ventured in just a little way? Maybe to that bend in the path, just to see what was around the corner. Two minutes in, two minutes back, keeping the gate—and the road—in sight. Surely four minutes wouldn’t make any difference to the walk home, right?

I heaved a sigh. Maybe it was for the best—a sign that now really wasn’t the time to go exploring, and that I should stick with Plan A: mark the road so I could find the spot again, and come back tomorrow. In the daylight, preferably with Paul, and failing that, at least after telling someone where to start looking if I happened to go missing.

I nodded in satisfaction at my new-old plan and looked one last time at the plaque. At the number 13 in large numerals, with a smaller The Morrigan’s Way in ornate lettering beneath it. And—

Was that another line of lettering below? I stooped to peer at it. Definitely letters, but they were too small to read without my glasses, and there wasn’t enough light to see by if I stepped back to—wait.

“Ha!” I tugged the pendant from inside my shirt and held it over the plaque, moving it around until the letters became clear and formed words that—

Knock three times on the gatepost if you want me.

I blinked. Rubbed my eyes. Repositioned the magnifying lens. Re-read the lettering. Yup. That was what it said, all right. Knock three times—and below that, more writing, even smaller. Twice on the gate if the answer is no.

I fumbled the pendant and almost dropped it. Who in the world would write words that mimicked the lyrics of an old Tony Orlando and Dawn song on a gatepost in the middle of nowhere? And why? I straightened and glared into the surrounding woods. I was the only person I knew who would even admit to liking Tony Orlando and Dawn anymore. This was a joke. A prank. It had to be. There was no other explanation.

But neither was anyone around. No one hiding in the bushes, watching for my reaction. No one recording me for posterity. No one…and no reason. What in heaven’s name was going on?

Gripping the pendant in a tight fist, I stared at the plaque, at the gate, at the path beyond. Once again, caution urged me to turn tail and run. Once again, I stood my ground. Then, feeling intensely foolish, I raised my free hand, curled my fingers into my palm, and rapped on the plaque—once, twice, a third time…

She wanted purpose. She got dark magick and war.

Claire Emerson is adrift. After a lifetime as a wife, mother, and grandma, she never saw divorce or loneliness coming and is desperate for a sense of purpose. But when her sixtieth birthday brings a snarky gargoyle, an annoyingly sexy wolf shifter, and an unknown magical calling, she thinks she’s losing the only thing she has left: her sanity.

Refusing to believe she’s the powerful defender of humankind her so-called protectors claim, Claire attempts a return to her safe life…only to have her powers ignite when she’s attacked by dark supernatural creatures. And without the training she was supposed to have received, she has no idea how she’ll defeat sinister mages plotting her demise.

Can Claire overcome creaky joints and major hot flashes in time to save the world – and her own life?

“Between crows and pendants and non-existent addresses, I was beginning to not much like being sixty. Life had been a great deal less weird when I was only fifty-nine.”

Lydia M. Hawke is a pseudonym used by Linda Poitevin for her urban fantasy books. Together, they are the author of eleven books that range from supernatural suspense thrillers to contemporary romances and romantic suspense.

Lydia moved to Canada’s capital region of Ottawa-Gatineau more than thirty years ago with the love of her life, which means she’s been married most of her life now, and she’s spent most of it there. Wow. Anyway, when she’s not plotting the world’s downfall or next great love story, she’s also a wife, mom, grandma, friend, walker of a Giant Dog, keeper of many cats, and an avid gardener and food preserver. Her next great ambition in life (other than writing the next book, of course) is to have an urban chicken coop. Yes, seriously…because chickens!