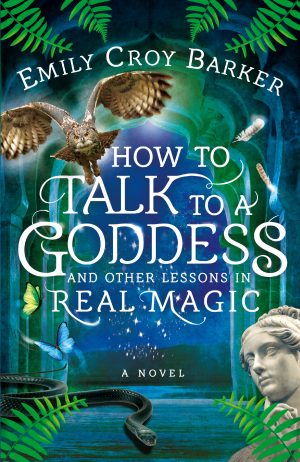 “That’s good,” Ramona said, when Nora told her about the wineglass, back in New Jersey, as they were walking home from the public library. It was the first chance she’d had after her visit to school to speak to her sister alone; at the house, their father or their sister Leigh or Nora’s stepmother always seemed to be in the room, too. Ramona was the only person in this world who knew, sort of, how Nora had spent the past year.

Now she seemed more interested in what Nora considered a side issue. “Why were you with Adam? I thought you guys broke up.”

“We did. It was just a friendly drink.”

“But he was a jerk to you, wasn’t he? Why were you having a drink with him when you could have changed him into an ant and stepped on him?”

“I don’t hate him that much,” Nora said.

“Then don’t step on him.” Ramona was nothing if not practical. “Or—I know—give him a dog’s head. An ugly dog. Or poison his drink, turn it into something really gross.”

Nora snorted. “One of those Australian chardonnays he hates.”

“I was thinking of warm spit.”

“The chardonnay would be worse.”

“Whatever.” Ramona shrugged. “You could make warts grow all over his body, or turn him into a fat old lady, or make it so flies come out of his mouth every time he talks.”

“That’s disgusting,” Nora said, chortling. She had a quick mental picture of Adam lecturing to a classroom full of undergraduates, trying to ignore the cloud of flies buzzing around his head. “I wouldn’t be that obvious,” she said. “I’d—oh, I’d make his face break out.” Was there a spell for ensuring that he’d never get tenure? “Or I’d make him just a little bit shorter.” Adam was already sensitive about his height.

“Make him a lot shorter! Two feet tall. And everything he eats will taste like old sneakers.”

Mentally Nora ran through some of the curses she had read. Many of them had to do with weakening an enemy in battle or harming his livestock, or they involved various intimate matters that she thought—she hoped—her eleven-year-old sister would not understand. “He’ll be stricken with fear at, um, faculty meetings, his books will get bad reviews, and he’ll fall in love with a fish.”

“It’s actually a fairly harsh curse,” Nora said. “Depending on the kind of fish. People have gone crazy or drowned. I’d be nice—I’d make it a goldfish, and Adam could just keep it in a bowl.”

Nora knows she needs to move on, and forget about magic. She’s back in graduate school, and her life is going surprisingly well. She doesn’t need to think about other worlds, about enchantments and demons, or about magicians—even though she once aspired to become one herself. Most of all, she really should forget the magician Aruendiel, who shared the secrets of magic with her but fiercely guarded the deepest secrets of his heart.

Then a chance encounter gives Nora the opportunity to slip between worlds again—and the next phase of her magical education begins.

Clever, lush, and riveting, with the same wry humor and vivid characters that delighted fans of its prequel, The Thinking Woman’s Guide to Real Magic, Emily Croy Barker’s new novel opens a portal for readers into a brilliantly realized world of enchantment, love, and danger. Readers of Philip Pullman, Deborah Harkness, Catherynne Valente, and Susanna Clarke will relish this novel’s magic.

A graduate of Harvard University, Emily Croy Barker is a writer and editor who grew up in North Carolina and Maine and now lives in New Jersey. By day, she covers lawyers—formerly as executive editor of The American Lawyer magazine and now as an in-house editor at a large legal organization. At night and on weekends, she gets to write about magicians.