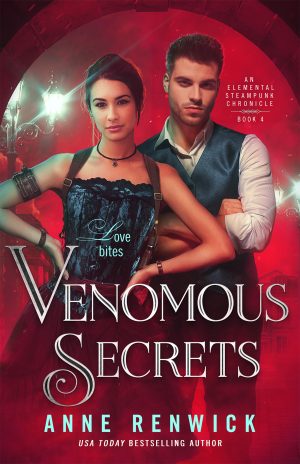 A jolt crackled down his spine and heated the air in his lungs, halting any words he might have formed in response. She was stunning, her beauty unmuted by the dull gray gown she wore or the refrigerated storage chambers that served as a backdrop.

“You must be the infamous Jack Tagert, Jack of all trades.” Unless he was much mistaken, he detected a hint of a Scottish accent.

“Master of none.” He grinned. An epithet he’d earned by refusing to sit the medical boards in favor of working in the Department of Cryptobiology, before abandoning medicine and research altogether. It was rare for an agent’s reputation to be known to a lady. “So I am.”

She glanced from Mr. Black back to Jack, both expectant and assessing. “Does the chill in the room always extend to such proceedings, or do the two of you have something you’d like to get off your chests?”

Her dark eyes flashed, and her wide mouth hinted at a suppressed desire to laugh. At both of them. An unusual reaction.

Cautious deference had always colored the manner in which women approached him, be they Lister employees in awe of a Queen’s agent, or calculating debutants who simpered and giggled, trying—and failing—to entertain a man who, with a sudden stroke of mortal luck, might become a viscount.

He couldn’t recall the last time a woman addressed him with such brazen overfamiliarity.

Was Black growling? His gaze flicked sideways. Indeed, a dark cloud had descended upon the man’s face.

“Oh, for aether’s sake,” the woman exhaled, stepping around the body to extend her hand. “Allow me to introduce myself. Miss McCullough, venom expert and sister to the mute Mr. Black who rather grudgingly permits my involvement.”

Sister? Black had family? His eyebrows shot up. Jack would have been less surprised to learn that the man was raised by a pack of wild wolves.

“A pleasure to make your acquaintance.” Jack bent over her bare fingers, lips twitching at this opportunity to vex Black with situationally inappropriate ballroom behavior. He did, however, wish to live. And so, the kiss dropped harmlessly into the air above her hand.

When he straightened, Miss McCullough’s gaze momentarily alighted upon his lips. Was that disappointment in her eyes?

Bored with exploring the possibilities of her unique biology in a laboratory, she longs for excitement. And investigating a vicious fanged creature who stalks its victims by lamplight in darkest London offers the perfect opportunity. Working with a handsome, unmarried agent? A delightful bonus.

While chasing suspects was once second nature, impending blindness threatens his line of work. The timing couldn’t be worse. When a deadly attack upon a lord at his brother’s engagement ball connects to a string of odd murders, the hunt begins for a seductive predator.

Bound by societal scandal, they must trace the creature’s past.

Every clue spirals them deeper into peril as they struggle to separate fact from myth. As the venomous truth slithers near, the fight to survive draws Jack and Cait ever closer. With lives on the line, and time running out on Jack’s dimming vision, the pair must untangle a mystery to stop the body count from rising.

Though USA TODAY bestselling author Anne Renwick holds a Ph.D. in biology and greatly enjoyed tormenting the overburdened undergraduates who were her students, fiction has always been her first love. Today, she writes steampunk romance, placing a new kind of biotech in the hands of mad scientists, proper young ladies and determined villains.