After World War Two, Sergeant McCabe knew the British army could send him anywhere. He never imagined facing down another Nazi threat on Mars.

In New Berlin colony, rivalry between Generalfeldmarschall Seidel’s Wehrmacht and Reichsführer Wagner’s SS threatens bloodshed. The Reichsführer will sacrifice everything to initiate the secretive Hollow Programme and realise his nightmarish future for humanity.

McCabe, Private Jenkins, and the Mars Expeditionary Force must overcome bullet, bomb, and bayonet to destroy the Third Reich. While Jenkins fights to stay alive, McCabe forms an uneasy alliance with MAJESTIC-12 operatives known as the Black Visors. Will this be the final battle of World War Two or the first confrontation in an interstellar war?

Damien Larkin is a part-time Planning Analyst and a full-time stay-at-home father of two young children. He enjoys turning terrifying nightmares into novels and currently resides in Dublin, Ireland. https://www.damienlarkinbooks.com/ 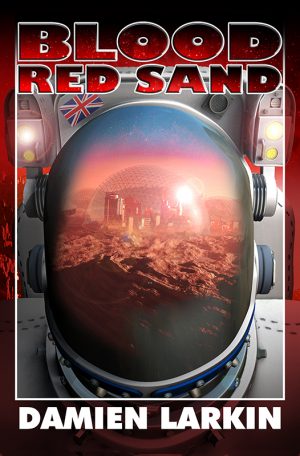 What soldiers he could muster from the crash site had mobilised into firing positions, hastily making use of any cover they could find. Light machine guns chattered back at the enemy position ahead, but in the confusion he had yet to amass a force strong enough to go on the offensive. From the hundreds of columns of black smoke dotting the surrounding valley, it looked as though the entire battalion was scattered for kilometres in every direction. Dozens of EVA-clad soldiers ran toward McCabe’s rallying call, while more contacted him via their helmet comms advising of their ETAs and locations.

“Sergeant,” Corporal Brown called over the comm system, “I’ve confirmed our location. This isn’t our landing zone. It’s Landing Zone Zulu. We’re closer to New Berlin then we are to Germania colony. That’s the Russian Liberation Army shooting at us.”

Cursing under his breath, McCabe snatched up boxes of ammunition from the debris of a smashed dropship. Not only were they a thousand kilometres from their assigned landing zone, but they had landed point-blank on top of Russian collaborators who had defected to the Nazis during the war. These men feared being handed over to the Soviet authorities. To avoid that fate, they would fight to the death.

“Any sign of the Fifth or Sixth Battalion?” he called back. “This is their zone.”

“Negative, Sergeant. But there’s hundreds of crashed ships out there, and there’s some sort of jamming signal wreaking havoc with long range communications.”

“Of course there is,” McCabe said and sighed. “Hold tight, I’m coming back.”

Dodging and weaving between the piles of warped metal and mangled bodies, he bolted back to the lines, laden with what ammunition he could carry. He kept his gaze towards the grey structure that lay a few hundred metres away. His mind ran through a dozen scenarios. Lost in thought, he saw the hulking figure a second too late and ran full force into him. The EVA-clad soldier barely flinched from the impact. McCabe hit the ground. Out of instinct, he lifted his Lee-Enfield, but the soldier already had his own weapon aimed at him.

“You are British, yes?” a heavily accented voice said to him.

“Yes,” he replied, recognising the soldier’s weapon as an AK-47.

“Good. Then we are allies.”

The soldier lowered his weapon and extended a hand. Pulling him to his feet, the towering figure slapped a firm hand across McCabe’s EVA suit, dusting grains of rusty sand to the ground. Bullets continued to whizz past them, but the burly soldier appeared oblivious to the danger.

“How do I know you’re not one of them?” McCabe asked wearily.

“One of who?” Sergeant Alexeev said, cocking his head.

“Them.” McCabe nodded towards the sound of enemy gunfire. “The Russian Liberation Army. The collaborators.”

The hulking Russian turned towards the sound of the enemy gunfire and began shouting in his native tongue. Raising his AK-47, he aimed in the direction of the enemy bunkers and bounded towards the MEF positions, blasting his weapon. McCabe followed close behind until they reached one of the forward firing positions. He threw the boxes of ammunition towards Corporal Brown and his soldiers passed the ammo clips around. Alexeev leapt towards their Bren gun emplacements and began redirecting fire towards the enemy machinegun bunkers, all the while shouting in Russian.

“Is this all we have?” McCabe said, scanning the small groups of soldiers spread out across the wreckage.

“Half the platoon is over there,” Brown said with a nod of his head. “On the right flank it’s a mishmash of platoons from B, C, and D Company. A couple of Frenchies, too. All-in-all, I’d say we’re screwed, Sergeant. Probably best to pull back and regroup.”