He’s the most savage of them all. A shifter who takes what he wants. And now he’s my best hope for surviving the dangerous journey between fortified cities.

After the Lykos-D virus ravaged the world, the survivors were left with a choice: suppress the virus with drugs and retain your humanity, or give in and embrace the shift.

My forebears chose the former, which means I grew up behind the wall, where I was safe from the warring lycan shifters and their animalistic appetites.

No one leaves the cities. Step outside and you can expect to get killed or claimed.

But now I have to leave. Lives depend on it. So I’ve made a dangerous bargain. Rurik will escort me between the cities. He’ll keep me alive and fight off any lycans who try to claim me.

But bargains have two sides. And Rurik’s protection comes at a far higher price than I imagined. Because he doesn’t want to keep me safe.

He just wants to keep me.

Rurik and the others continued moving down the wall, none of them looking back. I hiked the pack higher on my shoulder and hustled after them. By the time I caught up, they neared the watchtower. Its green flames still reached toward the sky, and the city’s glow was a soft halo around the blaze. The guards in the tower wouldn’t extinguish the fire until the ferals were out of sight. Which meant I would be out of sight too.

I swallowed against a dry throat and kept moving.

As my escort passed the watchtower, one of the ferals in the rear let out a low growl and broke formation. Rurik and the other male stopped and watched silently as he shot toward the wall and the two figures huddled at its base.

My breath caught. I’d forgotten about the females.

I looked at Rurik. “What’s he doing?”

The feral seized one of the females and hauled her to her feet. She fought him, but he overpowered her easily.

“Hey!” My shout echoed off the stone. The feral gave no indication he heard. He ripped at the female’s clothes, tossing rags and mufflers aside. Rurik and the other male observed, their faces impassive. The female let out a hoarse cry.

I didn’t think. I just ran toward the wall.

“STOP.” Rurik’s command hit me in the back, the force of it like a hot whip striking my spine. I stopped and doubled over. The pack hit the ground as my eyes watered. Frantic, I reached around and felt my back through my shirt, half expecting blood. But there was nothing. Even as I rubbed my spine, the pain faded.

A pair of boots appeared beside me, and Rurik spoke. “He won’t harm her.”

I straightened, my insides trembling, and fought the urge to cower away from him. He gazed at the wall, where the feral held the female by the shoulders. Her red hair streamed around her face. The male pushed it back and forced her chin up. After a second, he let out another growl and released her. Then he shoved her away and started back to the group.

Confusion swamped me. “What did he want?” I said under my breath.

Rurik looked at me. I hadn’t really meant to ask a question, but he surprised me by answering. “His mate left him. He searches for her.”

The male approached, his fists clenched and his expression grim. His actions made more sense now, even if his handling of the female irked me. Ferals were devoted to their mates. According to Michael, those with a particularly strong bond often felt physical pain when separated.

“He must be hurting without her,” I said.

“Hurt?” Rurik shook his head. “His mate ran from him. It’s fury he feels, not pain. He won’t stop hunting until he tracks her down.”

My gut clenched. I shouldn’t ask, but I had to know. “What will he do when he finds her?”

Anything else I might have said stuck in my throat.

The other male reached us, and then walked right past. Instead of taking up his previous position, he just kept going, his strides eating up the flat ground.

I swung my gaze to Rurik. “He’s leaving?”

“He’ll return. His anger impairs his judgment. Makes him less likely to sense a threat.”

So he was blowing off steam? That made him sound almost…normal.

“You would have intervened when he grabbed the female,” Rurik said. His golden eyes studied me. For a moment, I imagined I saw curiosity in his gaze. But then he blinked and it was gone.

I started to shrug, then thought better of it. He didn’t seem like the kind of person—feral—who responded well to nonchalance.

“I thought he was attacking her,” I said.

Rurik grunted—a short, noncommittal sound. “It’s foolish to get between a male and his mate. You have more courage than sense.”

Was that a compliment? I dropped my gaze to the dirt and gnawed at my lower lip, unsure how to respond. Or if I should. “Keep your head down and do as he says,” Michael told me. He neglected to give me advice for how to make small talk with a feral alpha.

Silence stretched. No wind stirred, and the warm air grew oppressive. My hair was still loose over my shoulders. I longed to stuff it back into a ponytail, but I wasn’t about to do it in front of Rurik.

But standing silent under his regard was harder than I thought. Was he waiting for something? My instinct was to lift my head and ask if he’d looked his fill. But that would have almost certainly earned me another lash of the metaphysical whip he wielded. And as much as my insides seethed at being forced to submit, I needed his protection.

And yet, he stayed silent. His gaze was like a weight pressing the crown of my head. Sweat trickled down my back.

I licked my dry lips.

Unable to stand it any longer, I finally looked up.

The alpha’s gaze was on my mouth. Even as I processed this fact, he snapped his eyes to mine.

His expression hardened. In a flash, he bared his fangs.

I flinched, flushing cold then hot as I anticipated his wrath.

But there was no lash or strike.

“Get your things, female,” he growled. “And keep up this time.” As he had at the gate, he signaled to the remaining male and walked away.

Fear flooded me, but there was also confusion—and anger. I’d bowed my head to the alpha, and his response was a threat? A feral’s fangs were serrated. They could shred skin and veins faster than a scalpel. He might as well have waved a machete in my face.

I clenched my fists. The bastard moved down the wall, clearly confident I would hurry after him. “Female” he called me, the word coated in disdain.

Recklessness gripped me, and I called out. “Or what? You’ll hurt me again?”

As one, Rurik and the other male stopped. The watchtower’s flames snapped overhead and bathed the ground between us in a sickly green glow.

My heart thudded like a drum. Stupid. I was so, so stupid.

Slowly, Rurik faced me. With shadows and distance between us, his golden eyes burned even brighter. The other male turned, too, his eyes a pale silver.

I held my breath, frantic thoughts tumbling through my head. Michael was right. It wasn’t safe beyond the wall. And I’d just put myself in even more danger. Worse, I’d jeopardized my whole mission. If Rurik killed me, the governor’s wife died too.

He stared me down, his predator’s eyes pinning me like the dusty, fragile butterflies on the mats in the museum. He said nothing, but his response was deafening all the same.

Yes. Yes, absolutely, he would hurt me again. Instantly. Effortlessly. I was in his world now, on the wrong side of the wall.

Werewolves, with dragons being a close second. I love them both so much I actually have a hybrid wolf-dragon in one of my books.

Ooh, Adam Hauptman for sure. Patricia Briggs is so good.

Spike. I love a villain.

I think I would choose the ability to heal injuries. That would be pretty convenient. 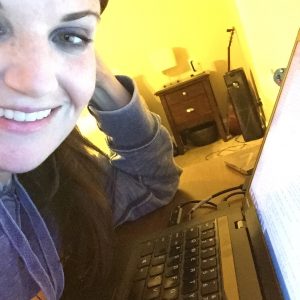 Amy Pennza has been a lawyer, a soldier, and a copywriter. She’s worn combat boots and high heels in the same 24-hour period—and she definitely prefers flip flops. Actually, she prefers going barefoot while writing steamy romances about strong women and alpha men with hearts of gold. After years in Tornado Alley, she now makes her home in the Great Lakes region with her husband and five children.