Bite Me Another Day

A bite between friends… Now that’s all kinds of awkward.

Which is a big problem for Ivy Martens. Sure, she and Ty Ferro might’ve broken a handful of antiquated vampire society rules when he had his teeth in her neck. But the bigger issue is her parents affianced her against her will to someone else. Now there’s a bounty hunter paid to bring her to the unwanted fiancé. The best person to help her out of this mess is the vampire she isn’t supposed to fall for.

Ty wants no one like he wants Ivy. He needs her as the friend that helps him handle the darkness his life as a vampire fixer entails. Not to reenact the hottest moment of his life, which happened before her parents arranged her to mate someone not him. He must remain cool-headed and detached to keep her alive. She’s not his to have, but nothing shakes him to his core like her.

“I’m not going to bite you again. You up there won’t tempt me.”

Ivy Martens compressed her lips and tilted her head to expose her neck. “Liar.”

Ty Ferro was tempted—waaayy tempted—but he wouldn’t cave to the pull between them again. He fisted his hand to hide his shaky fingers. He’d survived being shot, knifed, beaten, and buried alive, none of which kills a vampire. But hurts a lot. Through all of it he’d remained steady and cool-headed. Nothing shook the detachment that kept him alive and made him exceptional at his job. Except her.

The last time he saw her, five weeks ago when they kissed—and almost tore each other’s clothes off—they broke all kinds of vampire society rules. Although one of the hottest moments of his life with his teeth deep in her neck while she came against his fingers, it’d shattered both of them.

Sitting on his kitchen counter, one of her long legs clad in pink, silky pajamas crossed over the other. She swung a hiking boot-clad foot in a slow pendulum movement. A matching silken bathrobe floated loosely around her. The pink matched the colored ends of her long blonde hair.

Fantasies spiked, not that he’d act on them.

She reached down to pet the ears of his German Shepherd who’d rushed her, tail wagging, to put his head on her legs. Traitor. Not that he blamed the guy. He’d give his left nut to do the same thing.

“Hey, Alfie,” she said to the dog with a soft smile. “You taking care of Ty?”

“Hier,” he commanded. When Alfie returned to him and sat obediently at his side he asked her, “Why are you on my counter?”

“There aren’t any chairs in here.” She waved at the lonely kitchen table. “Besides it’s below freezing outside and I got cold.” She had the audacity to sip tea from one of his mugs. Based on the smell, it was his tea. Expensive stuff he’d picked up a few months ago in Mumbai. Maybe he’d bought it with her love of tea in mind, but she had no right to be in his house or drink it without his permission.

She toasted her mug toward him. “Want me to make you a cup?”

“Ivy! You broke into my house.” She might’ve gone through his stuff. Which of his things interested her?

No, I don’t care. She shouldn’t be here.

“A girl’s got to do a little B and E sometimes,” she said. 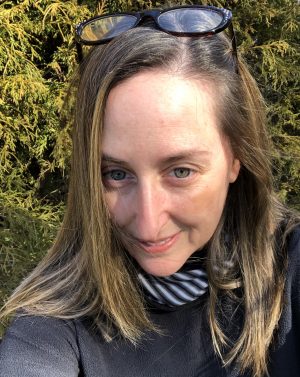 Award winning author, Zoe Forward is a hopeless romantic who can’t decide between paranormal and contemporary romance. So, she writes both. Her novels have won numerous awards including the Prism, Readers’ Choice Heart of Excellence, Golden Quill, Carolyn Readers Choice Award, and the Booksellers’ Best Award.

When she’s not typing at her laptop, she’s cheering her son on at baseball, chasing after the toddler or cleaning up the newest pet mess from the menagerie that occupies her house. She’s a board-certified veterinarian. You can ask her about your pet’s problem, but be warned she’s into integrative medicine so her answer might involve treatments you’ve never heard of.

She’s madly in love with her globe trotting conservation ecologist husband and she’s happiest when he returns to their home base.