Audiobook review: A Good Day for Chardonnay by Darynda Jones 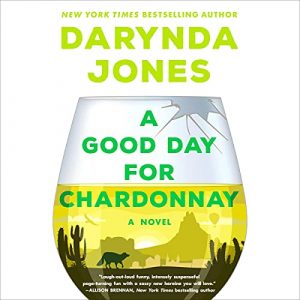 A Good Day for Chardonnay opens not too long after the conclusion of the first book, A Bad Day for Sunshine. Sunshine Vicram continues to situate herself in the roll of sheriff, helping out the town, and trying to discover the truth behind her abduction. The book has several storylines that run parallel, eventually criss-crossing and running all together.

I continue immensely enjoy Sunshine Vicram and her larger-than-life story. A Good Day for Chardonnay is filled with humor, romance, friendship, family, mystery, and a bit of suspense. The characters and their various relationships, especially the bond between Sunshine and teenage daughter, Aurie, are the best part of the story. The author creates three-dimensional, quirky, charming characters that I love. The back and forth banter is hilarious, but also touching at times. The connections create a lot of emotion, and I care deeply about each character.

Ms. Jones puts together a couple smart mysteries with several moving pieces that come together over time. Sunshine, Levi, and the sheriff department are investigating a knife attack with ties to Sunshine’s past. Aurie, Cruz, and Sybil pick up the pieces of a cold case. Additionally, Sunshine is contacted by Levi’s uncle, Wynn, regarding details of her abduction. Although there is a lot going on, the book flows well, and each case is easy to follow.

Overall, the stories and characters are amazing, but I did have two small annoyances. First, it is painfully obvious who Aurie’s father is since the first book, and it’s frustrating that Sunshine can’t or won’t put it together. Also, I know that Aurie is only 15, but she made a few TSTL (too stupid to live) moves – and not just once, but similar things over and over.

Narration: The story is shared via the alternating third person POVs of both Sunshine and Aurie. The narrator remains the same female voice for both POVs and changes with dialogue. Although a few of the voices sound similar, Ms. King creates a cast of dozens, adjusting each for gender, age, etc. Her males are deeper; Levi is sexy and rough. Her females range from average to deep timbre. She does younger (teen) amazingly: her Aurie sounds just like a fresh, sometimes angsty, teenage girl. Ms. King’s performance adds value to the overall experience, submersing me into the story.

In the end, I AM LOVING this series. The characters are amazing: smart, fun, witty, silly, passionate, loyal. Their love for one another, whether familial, romantic, or friendship, makes the story all the better. I continue to absolutely enjoy Sunshine Vicram and cannot wait for the next tale.

Ratings:
Story: A-
Narration: A+

Running a small-town police force in the mountains of New Mexico should be a smooth, carefree kind of job. Sadly, full-time Sheriff–and even fuller-time coffee guzzler–Sunshine Vicram, didn’t get that memo.

All Sunshine really wants is one easy-going day. You know, the kind that starts with coffee and a donut (or three) and ends with take-out pizza and a glass of chardonnay (or seven). Turns out, that’s about as easy as switching to decaf. (What kind of people do that? And who hurt them?)

Before she can say iced mocha latte, Sunny’s got a bar fight gone bad, a teenage daughter hunting a serial killer and, oh yes, the still unresolved mystery of her own abduction years prior. All evidence points to a local distiller, a dangerous bad boy named Levi Ravinder, but Sun knows he’s not the villain of her story. Still, perhaps beneath it all, he possesses the keys to her disappearance. At the very least, beneath it all, he possesses a serious set of abs. She’s seen it. Once. Accidentally.

Between policing a town her hunky chief deputy calls four cents short of a nickel, that pesky crush she has on Levi which seems to grow exponentially every day, and an irascible raccoon that just doesn’t know when to quit, Sunny’s life is about to rocket to a whole new level of crazy.

Reviews in the Series:
A Bad Day for Sunshine by Darynda Jones (Sunshine Vicram #1) – Audiobook Review