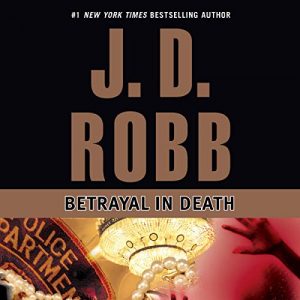 Betrayal in Death is the twelfth book in the series and still has me wanting more.

Betrayal in Death has Eve casing an assassin for hire, Sly Yost. While Eve wants him for the murders he comments during the story she also wants the person(s) responsible for hiring him. The victims are loosely connected to Roarke, working for different companies he owns, leading Eve to believe Roarke is real target.

Between the action, mystery, and thrills, there’s more progression on Peabody and McNab’s relationship. Seems McNab is in it more than Peabody until they hit a bump in the road, or should I say in a supply closet at work.

Betrayal in Death is a solid addition to the In Death series, and I enjoyed seeing all the regulars and watching the pieces fall into place, leading Eve to catch the murder. I look forward to listening to the next novel, Seduction in Death, but first I’m going to read the novella in between, Interlude in Death.

Susan Ericksen has cemented her role as the voice of Eve and Roarke and all the reoccurring characters. She does a masterful job at delivering Robb’s writing into a living breathing enjoyment for listeners.

At the luxurious Roarke Palace Hotel, a maid walks into suite 4602 for the nightly turndown – and steps into her worst nightmare. A killer leaves her dead, strangled by a thin silver wire. He’s Sly Yost, a virtuoso of music and murder. A hit man for the elite. Lieutenant Eve Dallas knows him well. But in this twisted case, knowing the killer doesn’t help solve the crime. Because there’s someone else involved. Someone with a more personal motive. And Eve must face a terrifying possibility – that the real target may, in fact, be her husband Roarke.