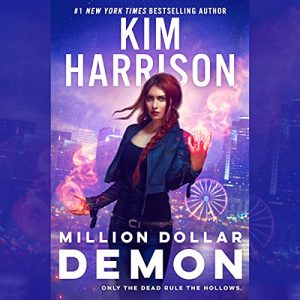 Million Dollar Demon finds Rachel dealing with the arrive of Constance, the new master vampire of Cincinnati. While master vamps are dangerous, Constance has the added element of being batshit crazy which makes her even more deadly.

Trent’s MIA for about 80% of the story because he and the girls went to Seattle to celebrate their mother’s birthday. But as always, he’s there for Rachel when she really needs him. But even when Rachel appears to be alone, she has help from Jenks and other friends. Rachel is the type of witch/demon who makes friends just as easily as she makes enemies. In some cases her enemies turn into friends.

Rachel is housing some displaced vampires at the old church while trying to look for a new place of her own. The city’s Inderlanders (supernaturals) are divided between ‘Team Rachel’ and ‘kill Rachel’.

Al is still not talking to Rachel because she’s refusing to not shun Hodin. We get an appearance from Dali when Rachel escapes a crime scene with vampire, Pike to the Everafter.

Speaking of Pike, I’m liking him as a character and think there’s more good than bad going on with him. I hope we continue to see more of him.

Million Dollar Demon is a typical installment in the Hollows series, full of action, a touch of romance, funny banter. What’s not typical is Rachel getting different Inderlanders to work together. We’ll see if it last or if it’s a one time deal to fight the new “big bad”.

Marguerite Gavin once again works her magic with the narration. She is also a joy to listen to while telling a Hollows story. I look forward to listening to the next novel in the series.

To save the city, Rachel Morgan will need to show some teeth in the next Hollows novel from number-one New York Times best-selling author Kim Harrison

The new master vampire of Cincinnati has arrived…and she wants Rachel Morgan out. No matter where Rachel goes, Constance is there – threatening Rachel’s allies, causing citywide chaos, and, to add insult to injury, even forcing Rachel out of her current quarters. Ever since Rachel found a way to save the souls of vampires, the old undead’s longtime ascendancy has been broken. Now Constance sees eliminating Rachel as the key to consolidating her own power.

Rachel has no desire to be enthralled or killed – and she’s terrified of what may become of the city if Constance forces a return to the ancient ways. But even a witch-born demon can’t stand against the old undead – at least, not alone. And if Rachel refuses to claim the role of Cincinnati’s master demon, the city will tear itself apart, taking her and all those who stand beside her with it.