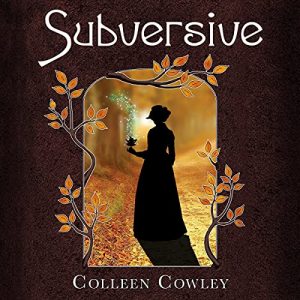 Imagine a world where women don’t have many rights, only certain men can perform magic, and those few men hold the highest offices in government. When Peter Blackwell returns to his small hometown to be its wizard, he forces Beatrix Harper to be his assistant. Beatrix is a part of the Women’s League for the Prohibition of Magic; however when she discovers that she too can perform her own magic, her world turns upside down.

Subversive is the first title in the Clandestine Magic series by Colleen Cowley. The book introduces listeners to an alternate history version of America where magic is real and an integral part of its history and shaping of its government. The details of the world are spun into the tale over time, and I enjoyed discovering new aspects with each chapter. The story focuses on a combination of a slow-burn romance and the fight for equality among citizens.

Overall, I really enjoyed Subversive; the slower pace works as readers get to know Beatrix and Peter from both of their POVs. I loved seeing Beatrix discover her talents and try to figure out her true place in the world. She supports and loves her sister and her ambition in the Women’s League, but Beatrix questions if that is what she wants moving forward. And I enjoyed following Peter as he struggles with his life choices. He’s done some rotten things and is trying to make amends, yet he continues to use poor judgment at times. The larger problems of women’s rights, as well as a horrific discovery regarding what the Army and government Wizards are doing, makes for an exciting and interesting story. The book leaves me wanting more because there is so much still to work though.

Unfortunately for Peter, he doesn’t take the time to trust Beatrix and forces her into a binding contract that puts her at odds with the wizard. Coerced to work for him, Beatrix is equally angry as she is curious. However, as the pair spends time together, they develop a unique bond. Their friendship and romance is different, complicated, and troubling. I was both a bit horrified and compelled by the story, yet enjoyed it wholly, and I look forward to seeing it play out.

Narration: The story is shared from the third person alternating POV‘s of the two main characters Beatrix and Peter. The narrator is a neutral feminine narrator who alters dialogue slightly, adjusting for age, gender, etc. Her voice is gentle and easy to listen to; very suiting for the narrator and characters. Her males are generally lower pitched. Her younger characters tend to be suitably bubbly and more vivacious. She does a good job creating unique character voices, and the voices work great together when performing dialogue between Peter and Beatrix, even with few to no dialogue tags.

In the end, Subversive is an entertaining fantasy, and I wasn’t prepared for the story to end where it did. The larger story is not over – the book is only part one of a larger tale.

In an America controlled by wizards and 100 years behind on women’s rights, Beatrix Harper counts herself among the resistance—the Women’s League for the Prohibition of Magic. Then Peter Blackwell, the only wizard her town has ever produced, unexpectedly returns home and presses her into service as his assistant.

Beatrix fears he wants to undermine the League. His real purpose is far more dangerous for them both.

Subversive is the first novel in the Clandestine Magic trilogy, set in a warped 21st century that will appeal to fans of gaslamp fantasy.