Audiobook review: You Spin Me by Karen Grey 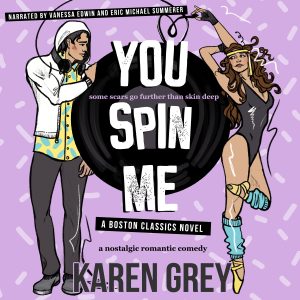 You Spin Me is an absolute wonderful romance! Cal and Jess go from strangers to friends to lovers and more, taking time to get each step (mostly) right before moving on. Their story bursts with emotion, pulling from me so many feels. I love that the characters are flawed and relatable, and their path to HEA is messy and rough, yet absolutely beautiful.

First, kudos to Ms. Grey who must have spent hours researching treatments for burn victims and the impacts of both physical and psychological trauma. Her main characters are real and three-dimensional because she is able to get listeners in the heads of her main characters. Listeners witness Cal and Jess’s individual journeys, which are filled with difficult steps and painful memories. My heart was tugged in several directions because I cared about both Jess and Cal and needed them to get it right.

Jess and Cal are the opposite sides of the same coin. While she would be classified as beautiful, she sees her beauty as a flaw. She is tired of people, guys in particular, liking her because of her hot body (i.e. big boobs). Meanwhile, Cal is physically scarred and doesn’t believe anyone can see past the exterior. They are both scarred: they both have issues with their appearance and being judged because of how they look, but they both have deeper scars on the inside. Cal’s internal scars are so deep, it’s impossible for him to accept love from Jess, but also blinds him to her internal scars, thinking nothing could be as bad as what he’s been through.

They finally get together, and whether it’s because they grow close via phone calls before they first meet, or because they are both good, caring people, we won’t know. But they share a passion for life and for each other that is consuming. It allows each to push at their boundaries and grow as individuals, while realizing there is damage that needs to be addressed. One of my absolute favorite moments of the book is a turning point for Cal reconnecting with his past and realizing he can become whole. The entire scene is so well written and continues to stick with me after I’ve finished listening to the book.

Narration: Karen Grey, a fabulous narrator in her own right, has picked up some amazing talent for You Spin Me. The story is shared in alternating POVs with Vanessa Edwin (VE) portraying Jess’s POV and Eric Michael Summerer (EMS) performing Cal’s POV. Both are well suited for their main character, and both are equally gifted portraying the opposite gender. VE gives Jess a perkiness with an edge, but can adjust for Jess’s weariness and frustration. EMS nails Cal’s deep, DJ voice, and adjusts it flawlessly between his on-air voice and his “regular Cal” voice. Both narrators come with a vast array of character voices, making each unique and fitting. They both nail dialogue, able to create a realism of many different people all talking together. The pair works well together. Their voices and performances compliment one another. And as an added bonus, each chapter has a retro audio introduction like an ad from the radio, and even one from 80’s comedian Bobcat Goldthwait.

You Spin Me is an absolute joy to listen to. The romance is heart-felt and emotionally satisfying because the characters are relatable and three-dimensional.

In this heartfelt, slow burn retro romcom, it may be the end of a decade, but it’s the beginning of a love story.