Bestselling author Jennifer Estep returns to her Crown of Shards world with an all-new trilogy and a bold new heroine who protects her kingdom from magic, murder, and mayhem by moonlighting as a spy.

Gemma Ripley has a reputation for being a pampered princess who is more interested in pretty gowns, sparkling jewelry, and other frivolous things than learning how to rule the kingdom of Andvari. But her carefully crafted persona is just an act to hide the fact that Gemma is a powerful mind magier – and a spy.

Gemma is undercover, trying to figure out who is stealing large amounts of tearstone from one of the Ripley royal mines when she encounters Prince Leonidas Morricone of Morta – her mortal enemy. Gemma tries to steer clear of the handsome prince, but when she finds herself behind enemy lines, she reluctantly joins forces with Leo. Also coming to Gemma’s aid is Grimley, her beloved gargoyle.

Despite the fact that Andvari and Morta are old, bitter enemies, a dangerous attraction sparks between Gemma and Leo. Further complicating matters is Leo’s murderous family, especially Queen Maeven Morricone, the mastermind behind the infamous Seven Spire massacre.

The closer Gemma gets to the stolen tearstone, the more deadly plots she uncovers. Everyone is trying to capture the crown, but only one queen can sit on the throne …

Capture the Crown by Jennifer Estep
Out today! 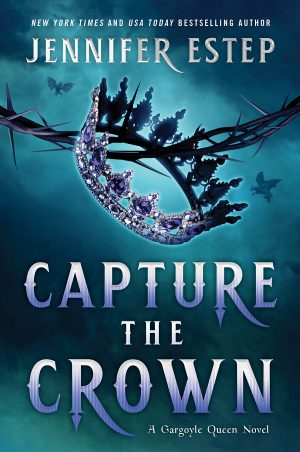 I started to head toward the mine when something brushed up against my mind. The new, unexpected presence was as soft as a feather tickling my skin, but I still froze. No thoughts buzzed in my ears, but my gargoyle pendant grew warm against my chest again, and my fingertips tingled as though I were clutching a lightning bolt. The tingling sensation meant one worrisome thing—that someone or something around here had magic.

My gaze swept over the street, the plaza, and the mine entrance, but everything was the same. Miners trudging to work, merchants hawking their wares, carts of ore rattling along the metal tracks.

A shadow zoomed by overhead, momentarily blotting out the sun, and that faint presence brushed up against my mind again. Who—or what—was that?

I grabbed the dagger out of my boot and walked to the opposite end of the alley. Then I reached out with my magic, searching for that faint presence. It was over . . . there.

I slipped from one alley to the next like I was chasing a feather drifting along on the breeze. Eventually, the last alley opened up into a wooded area, and I darted into the trees and crept forward, peering around a maple to find . . .

A strix standing in the clearing beyond.

The hawklike bird was similar to Grimley in that it was roughly the size of a horse, only with a much thicker, stronger body. The strix’s feathers were a vibrant amethyst-purple, and onyx tips lined its broad, powerful wings, each point as hard, sharp, and deadly as the arrow it resembled. The bird’s big, bright eyes were the same amethyst as its feathers, while its pointed beak and curved talons were a shiny black. A beautiful if dangerous creature.

Many strixes lived in the surrounding Spire Mountains, and the wild birds often zoomed over Blauberg, although they tended to fly high and fast to avoid the gargoyles, since the two species didn’t much care for each other. I didn’t see a saddle or any reins on this strix, but it didn’t seem like a wild bird. So where was its owner?

“See, Lyra?” a deep, masculine voice sounded, as if answering my silent question. “I told you the ride over the mountains wouldn’t be too bad.”

“Know-it-all,” the strix chirped in a high, singsong voice, although her tone was full of affection.

A man stepped around the side of the strix. He looked to be a year or two older than me, thirty or so. His longish hair was as black and glossy as the onyx points on the strix’s wings, while his eyes were a deep, dark amethyst. He had sharp, angular cheekbones, along with a straight nose, and his skin had the tanned look of someone who spent a fair amount of time outdoors.

He wore black leggings and boots, along with gloves and a long black riding coat. A black cloak topped his coat, and the layers of fabric outlined his tall, muscled body and gave him a commanding presence. A light gray tearstone sword and matching dagger dangled from his black leather belt, but I got the sense that the weapons weren’t nearly as dangerous as the man himself was.

He turned toward me, and I spotted a crest done in silver thread on his coat right over his heart—a fancy cursive M surrounded by a ring of strix feathers.

Shock jolted through me. Topacia had been right. There was a Mortan in the city.

Listen to an excerpt from the audiobook:

HarperAudio US · CAPTURE THE CROWN by Jennifer Estep

Jennifer is also the author of the Crown of Shards, Elemental Assassin, Section 47, and other fantasy series. She has written more than 40 books, along with numerous novellas and stories.