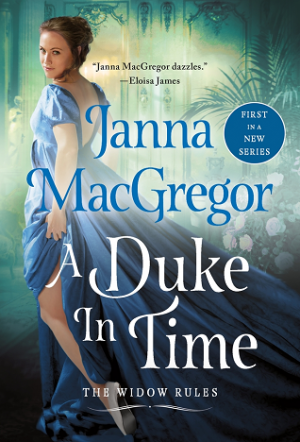 Katherine’s husband Meri died after they’ve been married less than a year. However,

she last saw her husband on their wedding day, only six hours after the wedding. When she goes for the reading of Meri’s will, Katherine discovers that Meri had married two other wives, with one being pregnant.

Christian, the Duke Randford, plans to wash his hands of his brother’s mess. But when the strong-will Katherine reminds him of his duty to these women, he softens. He’s actually a good man who doesn’t want to see these innocent women ruined. However, the more time he spends with Katherine, the more he is drawn to her.

A Duke in Time is a lovely kick-off to the new Widow Rules series focusing on a trio of women all married to the same, decease man. I love the premise, and I am happy to report that it holds up in the first title. What makes the pairing of Kat and Christian so successful is that both are very forward-thinking individuals who care more about taking care of friends and family than moving up in society. It works because when secrets come out, each is accepting of the other’s perceived flaws. The premise is a bit unrealistic for the time, but that what makes the story so entertaining. I liked that the couple can work things out together, and that their conflicts are minimal.

The supporting characters add a lot of value to the story – both in the ways they support Kat and Christian, but also with their own personal tales. The book sets up the future pairings for the other widows, and I’m excited for both. The group functions like a large family, providing unconditional love and support.

Katherine Vareck is in for the shock of her life when she learns upon her husband Meri’s accidental death that he had married two other women. Her entire business, along with a once-in-a-lifetime chance to be a royal supplier, is everything she’s been working for and now could be destroyed if word leaks about the three wives.

Meri’s far more upstanding brother, Christian, Duke of Randford has no earthly clue how to be of assistance. He spent the better part of his adult years avoiding Meri and the rest of his good-for-nothing family, so to be dragged back into the fold is…problematic. Even more so is the intrepid and beautiful Katherine, whom he cannot be falling for because she’s Meri’s widow. Or can he?

With a textile business to run and a strong friendship forming with Meri’s two other wives, Katherine doesn’t have time for much else. But there’s something about the warm, but compellingly taciturn Christian that draws her to him. When an opportunity to partner in a business venture brings them even closer, they’ll have to face their pasts if they want to share each other’s hearts and futures.