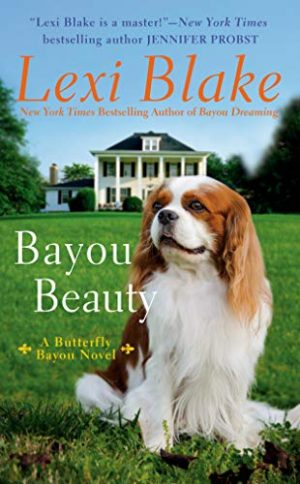 I’ve been waiting for Sylvie Martine’s story in the Butterfly Bayou series. She was the one character that from the beginning I wanted read about. How does a smart, educated 20-something with her whole career in front of her end up as mayor of little old Papillon, Louisiana? Finally we get her story in Bayou Beauty.

The first thing I like about Sylvie is that she’s an adult. She thinks about things and talks them out—like an adult. She owns her emotions, understands her flaws, and has reasonable expectations of herself and others. There’s no hysterical storming out of the room in the middle of an explanation just to delay the conversation that would prematurely end the book. If you need a main character to do that, you don’t have much of a story. Blake gives us a twist by flipping the story; we get a taste of the end at the beginning by having Sylvie marry Rene Darois in right up in chapter three. What should be the happily ever after is the starting point. That, to me, was a very promising beginning.

Rene Darois’s character introduces us to a common trope, he’s the best friend of Sylvie’s brother. Sylvie has loved him since she was a child. Rene is a little older and afraid to be the reason anyone he loves gets hurt, including Sylvie. He needs a marriage of convenience, but if you have to have one, why not the love of your life?  For Rene, this is not a fake marriage for he too has been in love with Sylvie from an early age.  He works to prove that to Sylvie. She wants to believe him, but Rene keeps getting in his own way. He’s so used to sacrificing himself and handling everything on his own that he has difficulty being the partner that Sylvie needs. Sylvie is really the hero of this story, pulling the best out of everyone and puts that expensive education to work by excelling in strategy whether politics or business.

I totally enjoyed this installment. It’s a quick, poolside read. Toss it in your pool bag and get lost for an afternoon.

Sylvie Martine was prepared to take Washington D.C. by storm, but she put that dream on hold when her beloved hometown of Papillon, Louisiana, needed her most. Now Sylvie’s the mayor of the tiny town on the bayou that holds her heart. But for Sylvie, this can only be a pit stop on the way to bigger and better things. The last thing she needs is an old love to resurface and threaten her goals.

Rene Darois’s whole life has been about serving his family–no matter how much it hurts. He’s used to sacrificing for his large extended family and the company his grandfather created. But he can’t believe the latest demand: he needs to find a wife and quick or he could lose it all. It would be a horrible situation. But he has just the solution: his high school sweetheart. Sylvie is everything he wants in a wife–smart, funny, and caring–and he planned to woo her anyway.

Now he just has to convince Sylvie that their love is worth it all, or he and the bayou will lose her forever.