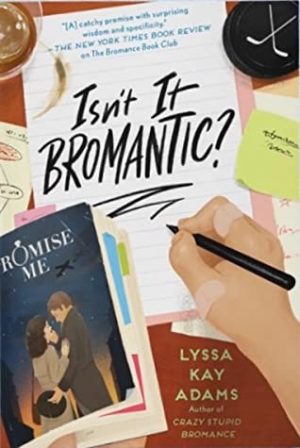 I’ve really enjoyed Lyssa Kay Adams’ Bromance Book Club series, and I’ve been waiting for Vlad (aka the Russian) to get his own story. He’s been a great secondary character bringing humor to the other guys’ stories.

Isn’t It Bromantic? brings us the story of Vlad and his MIA wife, Elena. Readers met Elena at the end of the previous book when she shows up, surprising Vlad.

Elena and Vlad are childhood friends from Russia and after she lost her father, Vlad married her so she could come to the U.S. Six years later, Elena is finished with her masters degree in journalism she was working on in Chicago. Vlad surprised her with the info that he wants a real marriage once she’s done. She shocks him by saying she wants a divorce and to return to Russia.

The Bro Book Club guys have read tons of marriage of convenience romances but they had no idea that one of them was living in one. Vlad has been keeping secrets from his friends and Elena.

After Vlad breaks his leg during a hockey match, Elena rushes from Chicago to Nashville to stay with him to take care of him. Vlad is both happy and sad to have her in his home. She is dead set on going back to Russia so Vlad tries to protect his heart. He’s been in love with Elena for years, and he thinks it’s one sided. Of Elena has had a crush on Vlad for years and when she finally sees him as a man and not the boy she was best friends with, she starts to realize her feelings for him is more than just a school girl’s crush.

Isn’t It Bromantic? is a great second chance romance with humor, sexual chemistry, tear jerking moments and a little danger thrown in. Fans of the series will enjoy Vlad’s story. While each story in the series could be read a standalone, I feel like you should read them all before reading Isn’t It Bromantic? You really need to see Vlad as the Russian before he’s the featured hero of his own story.

With his passion for romance novels, it was only a matter of time before Vlad wrote one.

Elena Konnikova has lived her entire adult life in the shadows. As the daughter of a Russian journalist who mysteriously disappeared, she escaped danger the only way she knew how: She married her childhood friend, Vladimir, and moved to the United States, where he is a professional hockey player in Nashville.

Vlad, aka the Russian, thought he could be content with his marriage of convenience. But it’s become too difficult to continue in a one-sided relationship. He joined the Bromance Book Club to learn how to make his wife love him, but all he’s learned is that he deserves more. He’s ready to create his own sweeping romance—both on and off the page.

The bros are unwilling to let Vlad forgo true love—and this time they’re not operating solo. They join forces with Vlad’s neighbors, a group of meddling widows who call themselves the Loners. But just when things finally look promising, Elena’s past life intrudes and their happily ever after is cast into doubt.