A few weeks ago, I needed a book for a cross-country flight and downloaded Andy Weir’s new book, Hail Mary—ready to lose myself in vastness of space while enduring the lack of it flying coach. I totally enjoyed the book; I didn’t even look up until the beverage service came around. (I will have my pretzels and cranberry juice!)  Since the main character is a seventh grade science teacher, that made explaining the science of how important solar radiation is to our survival much easier to dumb down “for the rest of us.” His book was interesting, even a little campy, but not in a bad way. I’m not sure it would work as a movie the way The Martian did, but Weir has already sold the movie rights to MGM and right now Ryan Gosling is cast to play the lead. With the right director (Phil Lord and Christopher Miller from the Lego Movie?) I think I could buy him as a middle school science teacher. Truthfully though, I’d really rather see A.G. Riddle’s The Long Winter Trilogy compressed into one movie. I would pay good money to see that!

A Project Hail Mary Movie Is in the Works

When I finished Weir’s book, I wasn’t quite done with it. I was still floating in space in my head. So, I went searching for something similar and found A.G. Riddle’s The Long Winter Trilogy. It predates Weir’s book by two years, but has a similar premise—something alien is stealing our sun’s output. We need that energy. What are we going to do? 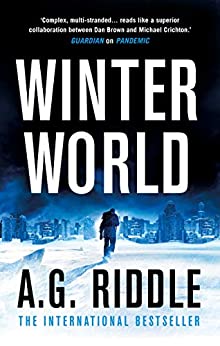 Winter World is the first book in Riddle’s trilogy. It sets up the problem, identifies the bad guys stealing our solar radiation, and we go to war to save ourselves. Written for the understanding of a better than average high school student, the science has to be followed but doesn’t slow down the action. I especially appreciated that when I made assumptions about what came next, the main character, James Sinclair, verbalized what I was thinking. After a while, I could relax into the story because I knew Sinclair would make the same leaps of logic that I did. I was delighted when he was three steps ahead of me and I got to be surprised. Winter World is a good first book and is sufficiently self-contained that you could read just the one book and be satisfied. 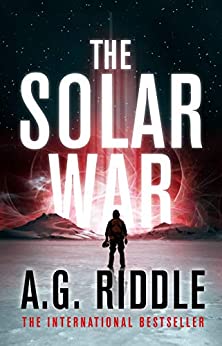 I did not know that it was just the first in a trilogy when I bought it, so I was thrilled to discover there were two more books. The Solar War picks up where Winter World ends. Our enemies do not go quietly into the dark. They want our sun’s energy and they want to leave us in an eternal night, one that would bring snow and ice and death. Having earned my trust in Winter World, I continued to easily suspend my disbelief and go along for the ride. I was comfortable there, not hampered by some of the criticisms I’ve read about character behavior. One person said they were annoyed by Emma’s, Sinclair’s wife, dithering for a few chapters about when to tell James that she’s pregnant. I’m sorry, but a woman may only be pregnant a few times in her entire life and she gets to pick her moment. She’s not just going to blurt it out when you want her to—which means I was successfully attached to her as a character. I was attached to others who served as engineers, doctors, computer and EVA specialists as well and I rolled right into the third book. *one-click purchase* 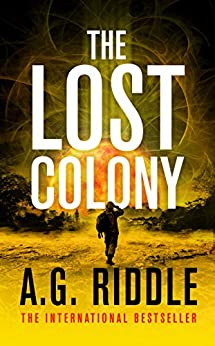 Books two and three do not stand alone as book one did. They really do go together. Book three, The Lost Colony, doubles down on the science near its conclusion, throwing us from high school physics up into college physics. Mostly it meant that I had to read those portions slower to fully digest them and their implications. The end has a good twist that you likely won’t figure out before you get there. I was rushing to get to the end while the characters were rushing to save themselves. As a result, I didn’t notice that the book was in fact, a little rushed until I looked back to review it. We get a lot of info at one time as the twist is revealed. I wonder if Riddle could have finessed and massaged that a little more if he hadn’t been on such a tight deadline. Perhaps he might have been a little less repetitive. Three books in one year is a lot. Still, I clearly loved it. I’m glad I found the series after it was complete so I didn’t have to wait for the next installment. Worth the time and money? Yes. I still have a lot of summer left. I wonder what I’ll choose next?

The Long Winter:  In the near future, a new ice age has begun. Humanity stands on the brink of extinction. Desperate for answers, scientists send probes into the solar system to take readings. Near Mars, they identify a mysterious object moving toward the Sun. Is it the cause of the ice age? Or could it be humanity’s only hope of survival?

With time running out, NASA launches a mission to make contact. But the object isn’t what anyone thought. In the dark of space, alone, the team makes a discovery that will change the course of human history—and possibly end it.

The Solar War: We thought the war was over. We were wrong.

They decimated Earth during the Long Winter. Now the grid has returned, and they won’t stop until the human race is extinct.

On a ruined world, humanity’s last survivors fight against impossible odds. In their darkest hour, they discover a new hope for survival. But it comes at an unthinkable price, with consequences that will change everything.

The Lost Colony: On Eos, the last survivors of the Long Winter face their greatest challenge yet—and race to unravel the deepest secrets of the grid. It’s a journey across space and time and into humanity’s past and future—with a twist you’ll never forget.