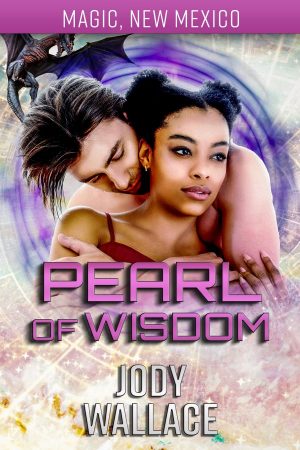 The security camera alerted Everett DeBoer to the presence of visitors before there was a knock on the door. As he was at a delicate part of the analysis of the enchanted hearing aid, he chose to ignore the interruption.

He didn’t like visitors. Visitors meant interacting with people, and he had to be in the proper frame of mind to do that.

Easing the needle into the audial sensor, he let his magic flow through the metal and attempt to dissolve the tricky seal on the device. Magical tech all contained a seal or ward to prevent it from being analyzed by mundane humans, but DeBoer devices could be unsealed for servicing. Inside any enchanted device, one could obtain the residue from any and all enchanters who had ever worked on it. With that data, he could—

The pounding on the door grew in urgency, accompanied by loud inquiries as to whether he was home. The voice was vaguely familiar, one of the local gnomes who were his primary competition for enchanted devices in town. Not that he had a brick and mortar store, but word got around, and the company wasn’t in a position for him to be refusing lucrative commissions. Security systems were his favorite after assistive devices.

“Hellllooooooooooooooo, old man!” a masculine voice shouted. Not the teenager. “Know you’re in there. Quit playing, neighbor.” Both Everett’s average-for-a-human hearing and his security camera picked up the demands of his intruder.

Everett growled softly to himself and then used a regular voice command to increase the volume of the music playing through the mundane wireless speakers. If the visitors kept it up, they’d disturb the ghost, and then he’d have to waste his valuable time calming her down, calming the visitors down, convincing them not to sue, and all that rubbish.

Returning his attention to the hearing aid, he carefully probed the sensor. Hiring a qualified tracer for the deconstruction would have meant including people outside the company in DeBoer’s troubles…and finding the money for it. Their lawyer, though skilled and magical, could do nothing yet, since there was no proof as to who was creating these counterfeit devices.

Or that they were counterfeit devices.

That was why it was up to him. It was his original design, and he knew it better than anybody. He was positive this wasn’t a DeBoer device. It might have the right patent mark, but it was slipshod sculpting, with knobby outer surfaces and obvious seams.

If he could determine the origin of this tiny piece of rubbish before he attended the annual Techbang Trade Show this weekend, he could prove that those bastards at Alpha Jacks had stolen his design and propagated this sloppy version to ruin his company’s reputation.

It was still under patent, dammit! Magical patents weren’t hackable. The thief had either pilfered the blueprints—not possible with Everett’s security—or figured out how to bust a patent. Once he proved it, Alpha Jacks would be dissolved and their business sold off in pieces by the Secrecy Commission, which did not abide by the same cumbersome strictures of human courts.

Rules kept the paranormal community hidden. Rules must not be broken.

But the visitors at his door were more persistent than usual. Everett’s security system emitted an eerie electronic screech before crackling with the unmistakable sound of overload.

“You know we’re here, ya mangy hermit. This is important!” a gnome shouted, the cry faint since the music volume was up and the security camera was down.

Everett thrust his rolling chair away from the desk, stormed through the house, the floorboards protesting his haste, and yanked open the front door. He pointed a pen knife toward the ground where he presumed his asinine visitor would be standing. “You owe me ten grand to replace the security system, neighbor.”

Instead he spotted a pair of shapely human legs in clingy, wildly patterned fabric. His gaze traveled up the body of the woman who was definitely not a gnome and froze on the most beautiful face he had seen since he’d fallen head over heels for his Minor Enchantments 101 TA in college. Dark eyes and lush lips, a perfectly shaped nose, smooth brown skin, and a glorious explosion of black hair seemed to shimmer in his vision before he realized he was gawking.

The woman inspected him in turn, and a frown gathered between her eyebrows. Everett lowered the pen knife. “You said he was an old man.”

“His kind of magic juggler don’t age like humans,” said the gnome. Everett tore his attention from the woman and spotted the short man, who bore one of those wretched magic negating guns and a smirk. A taxicab was parked in the driveway next to the SUV. “He’s a grumpy gramps.”

“I am not a grandfather. I’m not even a father,” Everett said to the gnome. “Did you shoot my security camera with that ridiculous bazooka?” DeBoer Tech made assistive devices, not weaponry and other tech of dubious ethics.

The small man grinned up at him. Unlike gnomes of myth, real gnomes did not wear red pointed caps and blue overalls. This one, while bearded, was dressed in cargo shorts and a T-shirt that read “Free Moustache Rides.”

“Relax, pops, it’ll reset in a few minutes. Just a fizz to get your attention.”

“Ten thousand dollars,” Everett ground out. Which gnome was this? Everett was good with magic and technology, not names and people and talking. “In cash.”

“He means it,” the woman advised the gnome. “Look, I’m sorry about Felvyn.” Her vaguely European accent wasn’t local, but people from many places frequented the paranormal sanctuary city of Magic, New Mexico. “It’s just that I desperately need your help, Lord DeBoer.”

“You do?” Everett’s eyebrows arched before he could conceal his reaction. “Are you a buyer? We have a website for that.”

He realized how rude he’d been when her frown returned. “I would prefer to discuss this in a more comfortable place. I’m told your house has air conditioning? I’m not used to the temperatures here.”

It was true that she did glisten. But he wouldn’t allow her beauty to override his common sense.

“What is this about?” Everett worked with machines. He enchanted, converted, or invented gadgets he could then enchant to work more accurately than those human science could manage. His magic, inherited through the family line, was surprisingly rare in a world that had become technology based, though sometimes tech affinity cropped up in witch bloodlines. He had heard things about the Hohenwalds. “Do you have a device that needs a custom upgrade or a security system installed?”

“No, I need an upgrade,” the woman said firmly. “My name is Pearl Courtier. I’ve developed an ability mixed with what I believe is your kind of magic and I need to get rid of it. No matter what Felvyn thinks.” 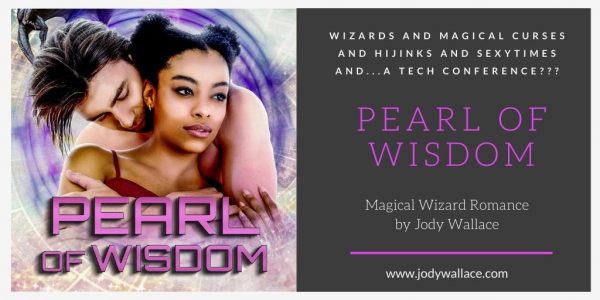 Blackmailed by the only man who can heal her—what’s a Pearl to do?

Pearl Courtier is a nobody. A human from Tarakona who just happens to have a famous wizard brother. When a lab accident transforms her into a walking lie detector, Pearl travels across worlds to seek help from a wizard on another planet.

But the price for stiff-necked enchanter Everett DeBoer to remove her curse is high. Pose as his companion during a business conference, and use her unique skill to tell him which of his colleagues are lying. What will Pearl do when she discovers how he’s been lying to himself—and how deadly that might be for both of them?

NOTE: This novel in the Dragons of Tarakona tales is the companion to DB Sieders’ Enchanted Pearl which is chock-a-block full of romance, gnomes, sea creatures, and adventure. Enchanted Pearl is #9 and Pearl of Wisdom is #10.

Jody Wallace’s 30+ titles include sf/f romance, paranormal romance, and contemporary romance. Her fiction features diverse protagonists, action, adventure, and humor. Her readers frequently comment on her great characters, suspenseful stories, and intriguing and creative world building. When describing her methods, Jody says: “There are two sides to every story. I aim to tell the third. And I add cats regardless.”

Outside of her fiction career, Jody has employed her Master’s Degree in Creative Writing to work as a college English instructor, technical documents editor, market analyst, web designer, and all around pain in the butt. You can learn more about her at https://jodywallace.com