Visions can lie…but, the truth can kill.

By the 1770’s, the glory of and power of Venice have faded, leaving the crumbling city vulnerable to conquest from without and irrational fear from within. A glimpse. A rumor. A whisper. That is all it takes for one ambitious man to bring the proud city once known as La Serenissima to its knees, terrorized by the evidence of plague and the thought of witchcraft.

Sophia Marivic struggles to hide in plain sight, afraid of the ancient Slavic blood that runs through her veins and gives her the ability to foretell the future. Her deepest secret is about to become her greatest weakness when she has a vision of a dark, mysterious man approaching Venice on a strange ship. The plague she fears the man brings is nothing she could have ever imagined. Death follows in his wake as he haunts and hunts her—heart, body, and soul.

As the body count rises, the calls for retribution against witches grow louder, and Sophia is caught in the crosshairs, trapped between the danger before her and the desire for the man who will be the death of her.

For Sophia, there can be no escape from her… Blood Fortune.

It was considered bad form for a witch to have a vision during High Mass.

Therefore, it was most natural and reasonable for Sophia Marvic to feel somewhat put upon at the sudden onset of what promised to be a vision of unusual strength.

Taking in a long breath, she forced herself to concentrate on the musty smell of the church that tickled her nose. She sat straighter, her corset easing and pulling as she breathed in and out, waiting for something, anything, to begin. Trying to stave off the full impact of the Sight, she exhaled slowly as the priest performed the rites during Sunday’s mass. Crucibles, sins, and forgiveness. She glanced toward the ceiling and stared at the faded, frescoed story of Christ and his sacrifice. Dust and spider webs found their home in the crevices. The muted colors of the paint melted into each other, and the Apostles wavered and grew blurry. She blinked several times and rubbed her eyes, but her vision would not clear. Apparently, contrary to her wishes, the Sight was determined to foist this particular vision upon her in this specific moment.

Merda, she thought to herself, as the familiar tugging and pulling drew darkness over her eyes and swept her awareness away from the hard wood of the pew and the cold stone beneath her feet. She knew better than to fight the onslaught for fear of drawing attention to herself, and she gave herself up completely to the bleak horizon that rose up around her.

October winds, strong and full of salt, drove a galleon hard on its keel into the churning, crashing waves. There was something off in her vision, though, for the winds seemed too steadily relentless to be entirely natural. The crew rushed about the deck and crawled along the rigging like frantic beetles, shaken but determined to hold on.

It was strange to stand on this deck with the merciless wind ripping her hair from its pins and braids, surrounded by chaos and yet untouched and unregarded. She was not troubled by the fact she felt the physical sensations of her surroundings. That was a common enough occurrence in her visions. What caused her heart to pound was the sight of two people standing near the prow, as unmoved and unnoticed as herself.

She crept closer, careful to hide herself behind the solid girth of one of the masts. Peering around it, she studied the two figures by the railing. One was a childishly petite woman with the palest golden hair, with perfectly rolled curls that bounced and danced uncaringly in the wind, even as the brilliant violet feathers in her velvet hat strained at the stitching. She wore a black lace veil that covered her face and wound an elegant trail around her neck. The veil alone probably cost six months’ wages for Sophia, and she could freely admit she envied the rich fur trim on the woman’s dark blue woolen cloak.

The man was no less well attired, though he sported black from head-to-toe, from his faultless beaver tricorn hat to the full-length cape that snapped in the wind, revealing a dark suit with gold buttons and surprisingly worn boots. Whereas the woman’s face was veiled, the man had no such disguise. He squinted against the wind, creating small, weathered creases at the corners of his eyes, and his full lips were set and hard. The sharp lines of his jaw and chin reflected just how hard he must have been clenching his jaw. 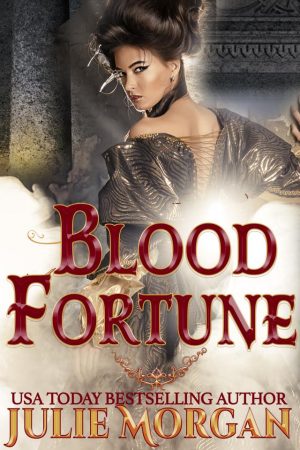 “You are not happy,” the woman said softly.

The woman said nothing, and for a few long moments, they both simply stood, looking out over the grey waves as if their line of sight alone could guide the ship to port.

“We should be there soon,” she said.

“Oh, what joy is mine.” The bitter sarcasm in the man’s voice bit into Sophia’s very skin.

“Why are we going to Venice if it will not make you happy?”

He shrugged, but the hand that rested on the pommel of his saber tightened convulsively.

“You are irascible today.” The woman gently pried his fingers from the handle.

“That is a big word for my little moppet.” A ghost of a smile played on his lips.

“Brooding brutes require big words to get through their thick skulls,” she retorted, tilting her face up at him.

He smiled, and in that instant, his face was transformed. Years fell away, and light came into his eyes. It was a short-lived metamorphosis, though, as melancholia once more tugged his lips down and pulled his straight brows into a frown.

“Come now,” the woman teased softly. “You were almost there. I very nearly had you cheered up.”

“You are too good to me,” the man replied sadly, shaking his head. “But, until I find what I seek, I can never truly be happy.”

“What if you never find it?”

The wooden railing under his hand cracked and splintered with a deafening snap that Sophia heard above the roar of the waves. “I cannot accept that. I will not accept that. If I did, what purpose would I have? What would be the point of my existence? No, I shall follow my ill star until my promise is kept.”

The woman regarded him steadily, then nodded and walked away. Sophia lost her in the periphery of her vision, but she wasn’t tempted to turn and follow the figure with her gaze. Everything she thought, saw, and felt was now centered around the man who now crushed the shattered railing with his bare hand.

Three heady poisons now ran through her blood, and her breath caught in her throat. She tried to exhale slowly to calm herself but could only gasp once more as the man turned in her direction.

And looked right at her.

Was it possible to drown while standing on a ship above the waves in a vision that could not be real? Because that was the sensation that consumed her. There was no air, no light, no sound. There was only him, and his dark gaze that was locked onto hers. The man did not move as he looked at her, but his eyes grew wider and more wild with every passing second.

She shrank back, wordless thoughts of fear and flight beating a terrified tattoo in the back of her mind. Yet, she was helpless against the way the shock on the man’s face turned to recognition, then once more to something predatory that whispered dark promises in the dead of night. Shadows began to tease the edge of her vision, narrowing it as if she was falling backwards through a spyglass. The last thing she saw was the man run toward her, reaching for her, but he was far away now and growing farther by the moment until she saw nothing at all by the blackness that engulfed her. 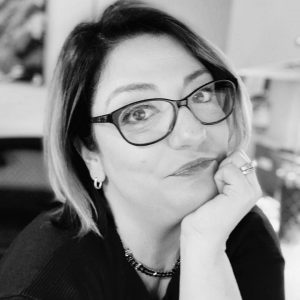 USA TODAY and Award-winning Bestselling Author, Julie Morgan, holds a degree in Computer Science and loves science fiction shows and movies. Encouraged by her family, she began writing. Originally from Texas, Julie now resides in Central Florida with her husband and daughter where she is an advocate for Special Needs children and can be found playing games with her daughter when she isn’t lost in another world.

Keep up with Julie. Join her newsletter and receive a free book!