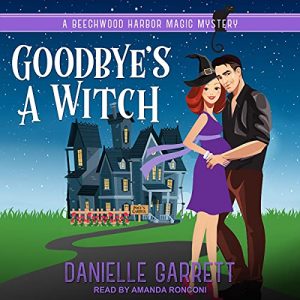 Danielle Garrett takes readers on one last adventure with witch Holly Bolt in Goodbye’s a Witch. It’s been roughly six months since Holly and Adam’s wedding (previous book). The Inn and Holly’s business is running smoothly; however, there is an issue with the supernatural transport system, causing a few unwanted hiccups, and stranding a powerful witch at the Inn. Speaking of hiccups, Holly is experiencing magical hiccups, which is disrupting her spell-casting.

While Goodbye’s a Witch has a standalone, albeit short, mystery, its value is more in tying up loose ends and concluding the series with a lovely bow. The gang comes together to deal with the rogue vamps that have been plaguing the Seattle area. Additionally, they are saying farewell to Evangeline, who is moving to California to be with fiancé, Teddy. The gang has visits from out-of-town friends, and we hear about most of the Beechwood’s denizens, each finding their path to a happy life. While I feel like the author didn’t adequately address the issue of human friends Cassie and Chief Lincoln nearly finding out about the magical world, I’m happy with how the series ended.

Narration: As always, Holly and her friends are brought to life through the delightful performance of Amanda Ronconi, who has consistently done a wonderful job. Her interpretation of Holly is always spot on. Ms. Ronconi convincingly portrays Holly’s thoughts, concerns, and expressions. Her voices are all well-suited, and she gives paranormals their own fitting voices.

In the end, I have thoroughly enjoyed my time in Beechwood Harbor. Holly and the gang have become wonderful book friends, and I’ll miss hearing about their antics now that the series is over.

The danger is rising, but this time, Holly is ready.

It’s a nightmare as old as time, creepy wraiths swirling in the shadows, waiting to strike unsuspecting humans. Following a disruption of their power, the vampires are more restless than ever and looking for one more fight.

When a young witch shows up on the Beechwood Manor’s front porch, begging for asylum, Holly can’t turn her away. But when the trouble nipping at the witch’s heels follows her through the manor’s front door, she might be the last guest Holly and Adam ever check in.

Will the battle between the vampires and the Haven Council prove to be the undoing of the magical world, or can Holly and her friends rise up and stop the vampires once and for all?

Find out in the final book of the Beechwood Harbor Magic Mysteries series.