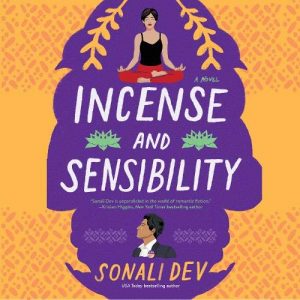 Incense and Sensibility is the third standalone romance in the wonderful Rajes series. The story focuses on Yash Raje as he runs for governor of California, opening with an attempt on Yash’s life by a racist. While he has few lingering physical issues, the event shakes the foundation of his beliefs and leaves him emotionally scarred. Reluctantly, he seeks the help of family friend India, an expert in yoga and stress management.

India and Yash share a past when they met ten years ago and fell in love over the course of 24 hours. However, family commitments and other events kept them apart. Seeing India after all these years causes many emotions to surface, forcing Yash to finally process and deal with his baggage.

Outside her amazing storytelling and three-dimensional characters, my favorite part of Ms. Dev’s writing is her expert ability to write awkward, uncomfortable feelings. Her characters are flawed and challenged. She gets inside their heads and allows the listener to understand the pain and baggage, creating a solid connect to each character. I felt the longing, anguish, pain, and joy alongside Yash and India. The story is about going past the bad to find the good, making the entire journey extremely satisfying.

Like her previous stories in the series, Incense and Sensibility is not just about the main characters’ relationship; however, unlike the previous book, listeners are not privy to any other POVs other than Yash and India. This time around we continue to witness the life of India’s sister, China, who was also an important part of the previous book. China’s story is somewhat of a reflection of India’s own struggles, but China wears her heart on her sleeve. India’s worry for China gives the listener insight to India’s own troubles.

Narration: The story is shared via the third person alternating POVs of main characters India and Yash. Soneela Nankani, a classically-trained actress of Indian and Ghanaian descent, performs each character fabulously. She covers a multitude of dialects and accents. She successfully portrays a wide range of ages. Each character is unique and distinguishable from the others. She pulls off male voices that sound masculine. And she infuses so much emotion into each character, bringing them to life and making the story come alive.

Incense and Sensibility is a sweeping love story, filled with powerful emotions. Yash and India seem almost fated to be together, but they have to fight for their love, making their journey difficult but rewarding.

Yash Raje, California’s first serious Indian gubernatorial candidate, has always known exactly what he wants—and how to use his privileged background to get it. He attributes his success to a simple mantra: If you control your feelings you can control the world around you.

But when a bigot with a gun attempts to assassinate him,  critically injuring his friend, Yash’s easy life suddenly feels like a lie, his control an illusion. When he tries to get back on the campaign trail, he blacks out with panic.

Desperate to keep Yash’s condition from leaking to the media, his family turns to the one person they trust—his sister’s best friend, India Dashwood, California’s foremost stress management coach. Raised by her grandmother and mother immersed in the practice of yoga long before it became trendy, India has helped San Francisco’s stressed-out overachievers for a decade without so much as altering her breath. But this man with his simmering intensity and absolute faith in his political beliefs is like no other client she’s ever had. Yash has spent a lifetime repressing everything to succeed.

India knows that for Yash to heal, he must face the feelings he’s buried, including the ones they once shared—a too brief, too bright passion that if rekindled threatens the life he’s crafted for himself. Sorting through the lies to get to the truth might be the only way to save him but it’s also guaranteed to destroy the dream he’s willingly shouldered for his family and community . . . until now.