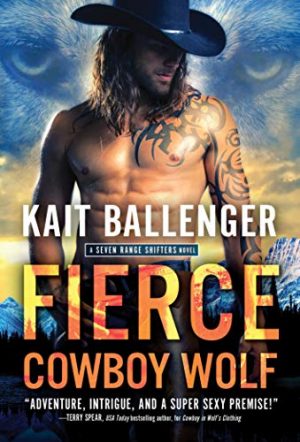 Wicked Cowboy Wolf is the 4th book in the Seven Range Shifters series by Kait Ballenger and while it could be read as a stand alone, it’s better read as the 4th book in the series because we see the hero and heroine through the whole series, making their HEA better when they finally get it.

Maverick is the grumpy packmaster of the Grey Wolf pack and Sierra is the first she-wolf trying to be a part of the warriors team who protect the pack. But it’s hard for a female to hold the position because the old school wolf Council members still think a she-wolf’s place is mating and having pups.

In Wicked Cowboy Wolf we finally get the whole story of why Maverick is so grumpy. Being packmaster is hard and having been told over and over that pack comes before anyone, even a wife or mate, has taken a toll on him. He believes he doesn’t deserve to be happy in his personal life when all he really wants is one sexy warrior, she-wolf.

After the Council rejecting Sierra’s application to a be warrior because she’s not mated, and shooting down Maverick’s idea to renew an alliance with the Execution Underground, the packmaster pitches the idea of a marry of convince. Sierra is not on board at first, she wants a real matting/marriage some day and doesn’t want a loveless arrangement with anyone, especially Maverick.

Wicked Cowboy Wolf is a mix of second chance love, friends to lovers, suspense (oh did I mention there’s a traitor within the pack trying to kill Maverick and possibly Sierra?), and a funny rooster named Elvis; and if that’s not enough there’s a randy horse named Randy. If you’re into shifters, cowboys, and or strong heroines who love grumpy alphas, then pick up a copy of Wicked Cowboy Wolf! If you’ve not started the Seven Range Shifters series by Kait Ballenger then start with the first book, Cowboy Wolf Trouble.

My Rating: B+ I liked it a lot

Cowboys by day, wolf shifters by night: These bad boys are ready to heat things up in a sexy paranormal wolf shifter romance from author Kait Ballenger.

She’s all he wanted, but was unable to claim…until now.

Sierra Cavanaugh has worked her whole life to become the first female elite warrior in Grey Wolf history. With her nomination finally put forward, all she needs is the pack council’s approval. But those stuffy old wolves refuse to elect her unless she finds herself a mate.

Packmaster Maverick Grey was reconciled to spending the rest of his life alone. Now, upon entering into treaty renegotiations with the other Seven Range clans, he needs the elite warrior vacancy filled—and fast. If Sierra needs a mate, this is his chance to claim her. But Sierra has an agenda of her own for their union, and they’ll need to work together against the assassin intent on barring the deal. For these two rivals, the only thing more dangerous than fighting the enemy at their backs is battling the war of seduction building between them…