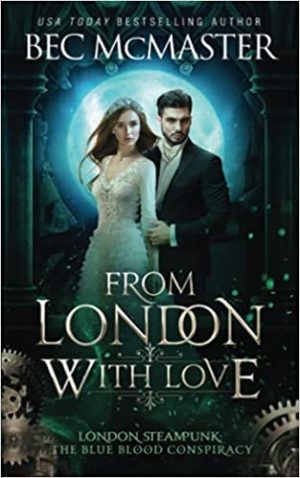 From London, With Love is a wonderful epilogue novella from Ms. McMaster to fans of the London Steampunk series. Although the story is shared from the POVs of several well-known characters, the tale centers on the human queen of Britain as she tries to heal and stabilize the country now that presumably all the bad guys are defeated. So who is trying to assassinate the queen?

It’s time for the queen to remarry and produce an heir to help keep the country stable. Of course Malloryn is pulling strings and playing puppet master as always. Many foreign delegates are in town, all hoping to align themselves with England via a marriage to the queen, giving several potential suspects for the Company of Rogues to investigate.

I loved getting to know the queen – I don’t know that I ever realized her name, or if we knew it. She’s well on the road to recovery from the mental and physical abuse of the previous prince consort. She doesn’t want to marry and has already given her heart to Sir Gideon, a human. Theirs is a sweet romance; he the perfect, patient partner who helps her overcome the last of her lingering fears. The mystery of who is trying to take down the queen is exciting and brings together the Rogues. The author also hints at a spinoff series to come.

All in all, From London, With Love is a wonderful bow placed atop one of my favorite series. It caps off years of chaos, giving closure but also sharing details of what may come next for the Company of Rogues.

With London finally at peace, there is only one threat remaining to the stability of the monarchy… The queen is without an heir.

Queen Alexandra is done with marriage, but as always, the Duke of Malloryn has a plan. With Malloryn insisting upon an heir for the realm, Alexandra reluctantly agrees to accept a husband. But who? With Europe’s most eligible bachelors in London to attend her exhibition, she finds herself pining for the only man who has never betrayed her. The only man she wants. And the one man she cannot have.

A queen’s duty is never done.

Alexandra’s feelings for her dearest friend, Sir Gideon, have always been warm, but a stolen kiss pushed a friendship into dangerous waters. How can she explain that she has never known desire before? How can she stand to be in the same room as Gideon, without betraying her feelings? And how can she marry someone else?

But there’s an assassin on the loose, and while she may currently be at odds with Sir Gideon, he’s the only man who can save both her wounded heart—and the future of the realm. Foreign princes and meddling dukes, bedamned.