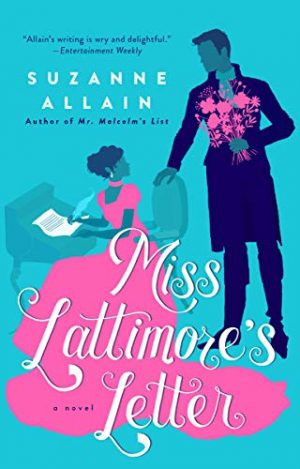 I haven’t read a historical romance in a while and it was nice to escape the current century by going back to Great Britain’s Regency Era in Miss Lattimore’s Letter.  Sophronia Lattimore is an interesting choice for a main character because she is literally a “nobody” in her own circle. She doesn’t have even as much recognition as Jane Austen’s Anne Elliot in Persuasion who was at least part of a notably social family. Having fallen into a scandal early after coming out into society, she fell back to become social wallpaper. With no means to support herself after the early death of her parents, she lives with and relies upon the goodwill of her Aunt Foster, earning her keep as a chaperone for her younger cousin, Cecilia.

Sophie’s aunt is not especially loving or concerned about Sophie, even going so far as to give her advice about how to be more invisible. Her cousin follows her mother’s lead and is a bit self-absorbed, although not obnoxiously so. While they can be categorized as unthinking, Allain has written them as authentic, not as caricatures who are easy to dismiss.

Being invisible has its advantages. Sophie is in a position to overhear and observe many people, deducing who, in her thoughtful opinion, should be together and who should not. She writes a letter changing the course of two courtships and is thrust into the limelight as a consummate matchmaker. It is not a role she relishes or feels equipped for, but one she embraces to spend time with Sir Edmund Winslow. Sir Edmund, it seems, is in want of a wife.

It’s not rocket science to see where this is going, but the journey is a fun one. Written in third person from both Sophie and Edmund’s POV’s, Allain’s writing style is light and mostly playful. In my head it is narrated by a woman in the same way that Geraldine James narrates the movie of Austen’s Northanger Abbey (2007). It’s easy to see the movie of Miss Lattimore’s Letter as you read, so it’s no surprise to learn that Allain started as a screenwriter. This would make a darling movie like her first book, Mr. Malcolm’s List.

The book is definitely Austen-esque and readers will enjoy this quick read by the pool or with a cup of tea. Cheers to happy endings!

Sophronia Lattimore had her romantic dreams destroyed years ago and is resigned to her role as chaperone for her cousin. Still, she cannot sit idly by when she becomes aware that a gentleman is about to propose to the wrong woman. She sends him an anonymous letter that is soon the talk of the town, particularly when her advice proves to be correct. Her identity is discovered and Sophie, formerly a wallflower, becomes sought after for her “expert” matchmaking skills.

One person who seeks her out is the eligible and attractive Sir Edmund Winslow.  As Sophie assists Sir Edmund in his pursuit of a wife, she wishes she could recommend herself as his bride. However, she vows to remain uninvolved while aiding him in his search (especially since the gentleman surely does not return her affections).

But when her long-lost love and Sir Edmund both seem to be interested in courting her, Sophie can’t figure out if she’s headed for another broken heart­­ or for the altar. How can she be expected to help other people sort out their romantic lives when her own is such a disaster?