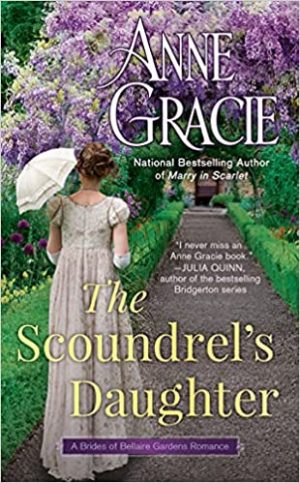 Based on the title of this story, The Scoundrel’s Daughter is a tale about Lucy and the blackmail arrangement her father makes with Alice, and that would be correct. However, the title could also easily be changed to Lady Charlton’s Rebirth and both titles would be right. Yes, this is a story of blackmail, but it is also a story of love, trust, and discovery, both of one’s self and of those one is surrounded by. The characters, in true Anne Gracie style, are quirky, quick-witted, and colorful. They are also strong, endearing, funny, and perfectly flawed: making for not one but two great love stories.

I believe the intent was for Lucy and Gerald’s love story to play out secondary to James and Alice’s love story, but in my opinion they both play out front and center and are in many ways dependent upon each other. Alice and Lucy are as connected and end up as devoted to one another as James and Gerald are; both sets of friends fight wars together. James and Gerald literally fight together in the war against France, and Alice and Lucy fight a less bloody war but one that has the potential to be just as devastating in terms of social standing as Alice attempts to deceive the ton and marry Lucy to a member of its elitist society.

This area is the one place I feel the story drops the ball a bit. Having read a large number of Ms. Gracie’s novels I feel like she doesn’t give Lucy’s lack of a background quite the attention it deserves. I have a hard time believing that the ton as a general rule would accept Lucy with few to no questions asked. The only person who seems at all suspicious and yet being the gossip monger that she is no one else seems to bite at her suspicions which feels like a flaw in the thread of the story. Maybe that happens because Alice and James’s story moves rather quickly to the forefront of the novel even if it doesn’t move to the forefront of the ton’s attention.

Outside of this issue, The Scoundrel’s Daughter is another lovely jaunt into the mind of Anne Gracie and her historical characters. James is strong and protective of Alice, His daughters are adorable; the cats give perfect comic relief; and Lucy and Gerald’s constant sparring are highly entertaining.

All in all, The Scoundrel’s Daughter is another successful visit into Ms. Gracie’s Victorian world and was a lovely way to spend a summer afternoon.

Alice, Lady Charlton, newly-widowed and eager to embrace a life free of her domineering husband  is devastated when a scoundrel appears, brandishing letters that could ruin her. To prevent their publication he wants Alice to find a noble husband—a lord!—for his daughter, Lucy.

Alice is forced to agree to his blackmail but when Lucy arrives, she has absolutely no interest in her father’s scheme. A lord, she says, will only look down his nose at her—and she’s having none of that!

Desperate to retrieve the letters, Alice enlists the aid of her handsome young nephew, Gerald, who in turn seeks the help of his former commanding officer, James, Lord Tarrant. James is soon beguiled by the marriage-averse lady and sets out to teach her about love.  Meanwhile, Gerald and Lucy strike sparks each time they meet.

To combat the dastardly plot, Alice and Lucy must learn to trust each other. But can Alice put the past behind her and open her heart to love?