Siege of the Seven Sins 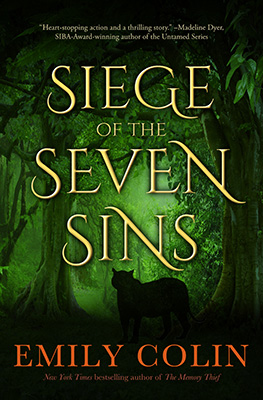 The world is on fire, or I am.

I come to consciousness with a start, tendrils of white-hot pain curling low in my belly, then spiraling outward to twine, vine-like, around my limbs. My body burns, fire-tipped thorns sinking deep into my bones, holding me still.

Pinioned, I turn my head—all I can move—sideways and see my hand, pale in the darkness of our tent. As I watch, horrified, it shimmers with light, then changes form: a talon, fledged with vicious, curved claws; a flipper, flapping helplessly against the nylon of the tent’s floor; a mammoth, black-furred paw, nails scrabbling, searching for purchase. The shifts hurt, and I stifle the need to cry out. There is some reason that I need to remain silent, a secret I need to keep—

Next to me, Ari stirs, and with the force of the water crashing over the edge of Black Falls—the place where the Bellatorum used to sacrifice our fellow warriors—I realize why I need to keep this horror to myself. There are no vines holding me in place; instead, the weight pinioning my limbs is him. I’m on my side, facing away from him, my back against his chest. He’s holding me close, his arm wrapped around me, his leg thrown over mine. His face is nuzzled into my hair, his breath warm on the nape of my neck. His scent surrounds me: pine needles from the forest we trekked through to get here; a hint of the tart berries we ate last night for supper; and his own burnt-sugar scent, as unique to Ari as his fingerprints. A scent that has come to mean home.

I’ve never woken up next to a boy before. In the Commonwealth, such a sinful action would have been punished with death or exile. Locked in my cell in the dungeons, imprisoned by the actions I’d taken to save Ari’s life, I’d dreamed of a moment like this. One day, I’d imagined, we might be free. I could hold his hand, even kiss him, and not worry that the Priests and Executor would find us both guilty of the highest treason—at best, exiled to roam the Borderlands; at worst, kneeling with our necks bared for our fellow bellators’ sverds in Clockverk Square.

That dream died the moment the Executor told me the truth.

I lie still, breathing deep, trying to force the paw to shift back into a hand. Ari thinks I’m human, a person. I’d just wanted one night with him, before I had to confess everything.

I’m a genetic experiment, my DNA spliced with that of four beasts. I was bred to be a weapon, and you were raised to be my slave. And if you don’t agree, then I will die.

Yeah, that would go over well.

I stare at the impossible paw, my skin sparking with heat, willing it to become a hand again. I have no idea how to do this. For all I know, focusing on it will only serve to make things worse. My vision shudders, and for a second I could swear I see the black fur creeping upward, limning my arm the way moss limns a rock, my bones shifting and cracking and changing—

I blink, my eyes feeling as if their sockets are stuffed with sand. It was an illusion, thank the Architect. The paw’s still there, but my arm looks normal. Relief breaks over me, until I feel Ari stir beside me. What will I do if he sees me this way? Please, I beg whatever forces out there will listen. Please make it stop.

Then, above me, on the ceiling of the tent, I see the shadows take shape and grow, the way they have since I was a child. As I watch, they converge, merging into a single trunk, branches reaching down toward me, knitting a canopy of ghost-trees, a forest within a forest. Skúmaskot, they hiss. Skúmaskot, look.

Never before have I been able to make out their words. Everything they’ve said has been no more than a susurrus, the syllables audible but braided together too tightly to unravel. Now I can understand them. Now they have called me by name—or at least, what the Executor said I was. Skúmaskot, a creature made of myths and shadows.

The shadow-branches curve further, their icy tips tracing that horrifying paw, sending shivers rippling through me—as if I’ve been touched by the darkness itself. Shapeshifter, they hiss again, their not-voices tinged with impatience. You are one of us. Skúmaskot, look.

I do what I never had the courage to do before: I peer into the heart of the shadows and let them show me what they will. And in their depths I see the greatest of contradictions.

The darkness is burning. And soon, we will be too.

A deafening sound fills my ears—the shadow-voices, roaring. The branch retreats and the tree cracks open, revealing a gaping hollow at its center. From the corners of the tent, shadow forms rush toward it—a swooping falcon, wings spread wide; a spike-furred wolf, belly low to the ground; a selkie, flippers pressed purposefully against its sides, its body an arrow; and last, a giant, prowling panther. The beast turns its great head and looks back over its shoulder. Run, it tells me, though its lips don’t move. Then it vanishes, consumed by the tree.

The creatures take all the oxygen in the tent with them. There is a noise that is not a noise, the rushing of air into a vacuum, so loud it hurts my ears. It seems absurd to me that Ari doesn’t wake. My outstretched arm burns and aches and stings, the pain devouring me.

Then, as suddenly as it came, the pain disappears. My hand is a hand again, and I can breathe. But when I inhale, I smell what the shadows were warning me about: The acrid scent of smoke.

Panic floods my veins, and I shake Ari to consciousness, each second the ominous tick-tick-tick of a clock. The bellators are coming, the world is burning, and we must run if we want to live.

Rogue bellators Eva Marteinn and Ari Westergaard have escaped the restrictive world of the Commonwealth and would like nothing more than to leave it behind forever. But for Eva in particular, it’s not that simple. She is the weapon the Commonwealth wants — and they’ll stop at nothing to get her back. For years, Ari has seen Eva as his temptation and his secret, his virtue and his sin. Now that they’re finally free, he wants what he’s been craving — to start a new life with her … together. But Eva is keeping a devastating secret of her own: The very victory the two of them have been fighting for is doomed to break both their hearts. Now she faces an impossible decision: Be the face of the revolution she’s dedicated her life to fueling and abandon the boy she loves — or sacrifice everything she’s fought for to stand by his side. 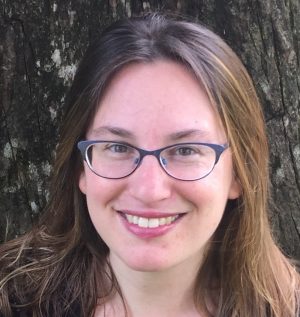 Emily Colin’s diverse life experience includes organizing a Coney Island tattoo and piercing show, hauling fish at a dolphin research center, roaming New York City as an itinerant teenage violinist, helping launch two small publishing companies, and working to facilitate community engagement in the arts. Originally from Brooklyn, Emily lives in coastal North Carolina with her family. She loves chocolate, is addicted to tiramisu, and dislikes anything containing beans. You can find her trying to do yoga, with her nose buried in a book, or hanging out at www.emilycolin.com.