I’m done being the good girl.

If I’ve learned anything in my almost twenty-one years, it’s that always doing what I am told has got me absolutely nothing and nowhere. Exhibit A: my cheating fiancé. Not only do I catch him red-handed on the night before our wedding, but he’s sleeping with Exhibit B: my supposed best friend. Which leads to Exhibit C: the part where I take off the blinders, take off the gloves, and take control.

I kick Exhibit A where it hurts, steal his prized bike, and make a beeline down the road of revenge straight into the arms of Exhibit D: Bran Blackwood. To call the Blackwood wolf pack rivals is the king of all understatements. As a Darkbane myself, I shouldn’t even be near him. I know better than to set one toe on enemy territory. I should have kept on riding, but one touch of Bran’s hand, and I’m unwilling to deny myself. And that’s before I meet Exhibits E and F, his brothers Alec and Conan. Once I met Bran, I was lost. Add in Alec and Conan and I can neither yield nor let go.

Take a ride with Promised to the Pack, book one of the Lone Wolves MC, a reverse harem series about a a sassy heroine who comes into her own in a way she never expected with three strong, growly wolf shifters at her side to reclaim all that’s been taken from her from bestselling author Laney Powell. 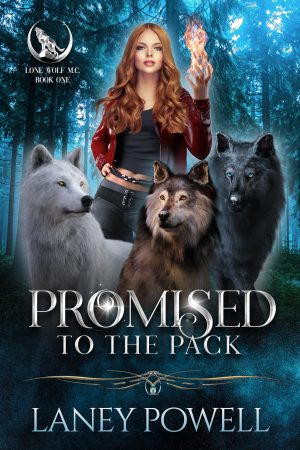 What in the unholy…?

If I could shoot daggers from my eyeballs, Zane, my fiancé, and Susan, my best friend, would be impaled, stuck to the headboard of my bed. They would be dead. Naked and dead.

“You’re supposed to be my best friend.” I glared at Susan, wishing for the daggers. “You’re marrying me tomorrow!” I looked at Zane then, watching the facade I’d built around him for years crumble into the bedsheets. My bedsheets.

“Lena, wait.” Zane put himself in front of Susan, as though she needed protection.

She’s sleeping with my fiancé, and he thought she needed to be protected?

I had to get out of here.

I took a couple of steps back. My hand landed on the dresser, closing around Zane’s keys.

“Put them down.” Zane’s tone shifted from wheedling to authoritative.

I’ve never been allowed to just grab his keys. One of the many things I wasn’t allowed to do.

I walked down the hallway, keys clutched in my hand. The beginnings of a plan are forming.

Voices exploded behind me. I raced down the stairs and wrenched open the front door. I needed to get out of this house. The cool night air hit me and I filled my lungs, my breath going in and out in ragged, tearing gasps.

I was halfway down the driveway when I heard the footsteps behind me.

A large hand grabbed my upper arm, yanking me backwards, nearly pulling my shoulder from its socket. “You’re not going anywhere. Come inside, and we’ll talk about this.”

I didn’t have a choice but to face him. I could see Susan leaning against the front door behind him, silhouetted by the light from the house. She looked so innocent.

Zane’s face, on the other hand, is hard and angry. He’s not used to me standing up to him, or telling him no in any fashion. “C’mon, Leeny.”

“That’s what I call you.” His voice is still rough, even though he’s trying to throttle down his anger. “We can work this out.”

“We were supposed to get married tomorrow.” I’m hyper aware of his hand holding me, not easing up on the pressure.

“We are getting married tomorrow.”

His hand tightened on my arm again. “You’re not going anywhere.”

“Let me go, Zane!” I pulled against him, but his grip was too strong.

My anger swelled once more, the way I felt when I saw them together in my bed. I called on all my strength, everything I had left. I dragged every ounce of magic I could muster, sending it toward my hands. A feeble flame flickered along Zane’s arm and he laughed as he looked down at it. “Are you trying to hit me with magic? With your magic?” He doesn’t bother to hide his scorn. “You’re not going to do anything other than come inside with me. We have to be up early tomorrow for the ceremony.” The nervy bastard pasted a smile on his lying McLiarpants face.

I jerked backward, wanting to be free of his touch.

He wasn’t expecting me to move in that direction and he lost his grip.

I didn’t hesitate. I turned to run away from him.

His hand gripped the back of my neck again, hard and unforgiving.

I tried to throw myself back and forth, tried wiggling out of his grasp and I felt his fingers tighten even more. Small black dots appeared around the edges of my vision, noticeable even out here in the darkness. But I was able to twist and look at him again. I could see the feral glow of his eyes. He was close to shifting. Zane had never been able to fully control his wolf when he was mad.

I had to get away before that happened. Otherwise I’d be lost in more ways than one.

“You’re going to come back inside and do what you’re told.” His fingers punctuated his words by squeezing my neck harder. He pulled me closer.

What, he was going to kiss me? Bite me?

I forced myself to relax a little, and his fingers eased up their pressure on my neck.

Am I really so easy? Do I always give in this easily? He obviously doesn’t expect much of me, even now.

“You’ll do what you’re told and quit making a scene or I’ll make you wish you’d never been born.” His words came out in a growl. The hand on my neck shook me to drive the threat home.

Which brought me closer to his head.

“Zane?” I forced my words to come out in a croak.

I leaned closer and took the biggest breath I could.

“You said you loved me. You said this meant everyone knew you loved me.” I wrenched the necklace I’ve been wearing for years away from my neck, breaking the chain. “Apparently you and Susan missed the memo.”

I let myself cry as I drove into the night. I have to do this, have to cleanse myself of them. As I cried, I started to feel lighter, to sit up taller. I took a firmer grip on the handlebars.

Now it’s time to make them all pay.

Vampire or werewolf. It depends on my mood.

I love both of them, but I will always go for PNR. To me, the romance makes a story. I love romance, and always have. PNR for sure.

Time travel with no bad side effects. 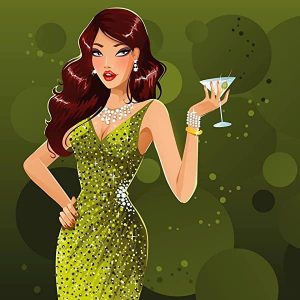 I’m a Midwestern lady, living life in the Rocky Mountains. I adore strong men with hearts of gold, even if that gold is initially hidden. That’s what drives me to write the stories that I write. I love not only a good cowboy romance, but a sexy demon, werewolf, or vampire love story, so look for all of the from me.