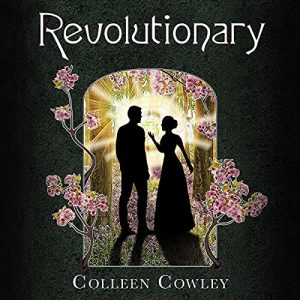 Revolutionary is the final book in the Clandestine Magic trilogy, a series that must be read from the first book for maximum enjoyment. There will be spoilers for the first two books in this review.

Our story opens just a few weeks since the conclusion of Radical, with Peter in a coma after barely surviving the explosion of a magical weapon fueled by his life source. Although unconscious, his mind is very much awake, and in fact, listeners are privy to his POV while in the coma. From there, we follow Beatrix’s attempts to cure Peter, help her sister and the League win rights for typics, and figure out what the Vice President wants with a weapon of mass destruction.

Revolutionary is a non-stop, heart-pounding adventure! There are so many ups and downs, I had to take a breather more than once. Just when I thought things couldn’t get worse for our main characters, the author would lift them up (and my heart), giving them a reprieve. But not for long, because Peter and Beatrix find themselves in dire straights over and over. It was an exhausting read in some ways, but well worth the journey!

The story starts with Beatrix working to save Peter, then the pair is forced to address their feelings while in the spotlight and working on the campaign for typic rights. The author uses a new narrative style for large parts of the book – giving readers headlines and bits of articles written by various news sources. It’s an effective and entertaining way to share different views the nation has towards the couple. Finally, the story shifts focus to the climatic plotline – trying to discover why the government is so intent on continued development and testing of the weapon Peter helped develop at the Pentagram. Overall, the story flows well and the entire book gives this reader a perfect conclusion to the series. However, I became a bit frustrated at points, when the low points seemed to be too much or go on too long. Yet, the author always pulled the pair out of the depths before I was ready to toss the book!

Narration: The story is shared from the third person alternating POV‘s of the two main characters Beatrix and Peter. The narrator is a neutral feminine narrator who alters dialogue slightly, adjusting for age, gender, etc. Her voice is gentle and easy to listen to; very suiting for the narrator and characters. Her males are generally lower pitched. Her younger characters tend to be suitably bubbly and more vivacious. She does a good job creating unique character voices, and the voices work great together when performing dialogue between Peter and Beatrix, even with few to no dialogue tags.

In the end, Revolutionary is an emotional ride filled with ups and downs and surprising twists. It’s a wonderful conclusion to this unique and entertaining trilogy, with a bonus peek into the future. I highly recommend the entire trilogy, and when you are finished, check out the author’s website for links to a prequel and an epilogue story.

In this final book of the Clandestine Magic trilogy, Beatrix Harper is poised to help her sister accomplish an audacious goal. They’re on the brink of winning back a key right for typics that wizards took away—and maybe, just maybe, getting women more rights in the bargain.

But first she has to rescue Peter Blackwell, trapped in a dark-magic coma. And figure out what a former friend is plotting after nearly killing Peter and disappearing. And stay one step ahead of the vice president’s men.

What her enemies have planned is worse than she realizes. Far worse.